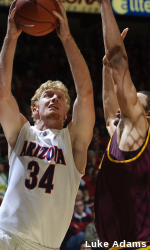 The Wildcats came out playing superb defense tonight, holding James Harden to 4 points in the first half. Unfortunately, the game remained close going into halftime because of Arizona's own poor shooting.  Arizona was 1-9 shooting 3 pointers and only 30% from the field for the first half. Arizona fell to ASU 53-47.

Besides Jordan Hill's 14 rebounds, he also committed 6 turnovers, adding 16 points on 5 of 16 shooting. He was called for an offensive foul on a screen with :12 second left in the game. Here is a replay of the highlights from Fox Sports with the foul at the end. Terrible call.

The fact that we lost at home while holding Arizona State to 28% shooting is ridiculous. Someone needs to be held accountable for this performance. NaterB's Sports Capsule wonders if the Cats are NIT bound?

Coach Pennell said it best after the game:

I guess that's his way of saying that Arizona will get an "E" for effort, but may not win many games this year. Sad.

Can someone explain why it took 7 seconds for us to foul after Zane Johnson hit the 3 pointer with 26 seconds left?

Was Pennel's technical really a good time to try  and stand up for your team? I think not.