The Wildcats picked up another commit yesterday grabbing Gardena California Defensive Tackle Sione Tuihalamaka. 6' 2" 275 lb. badass. Tuihalamaka had offers from Oregon and Nebraska on the table and chose Tucson to join his cousins Vuna Tuihalamaka and brother Apaiata Tuihalamaka. This gives the Wildcats 21 commits for their 2009 class.  Here is a list of commits. 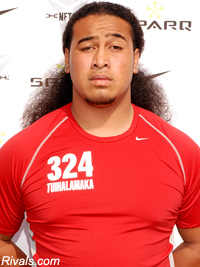 Anthony Gimino says that the season is o-v-e-r. We still need 9 wins to get to that 20 win mark and still have home games against Washington, Washington State, USC, UCLA, Cal and Stanford.

Arizona football will play USC on December 5 this year.  Arizona has not concluded a regular season against anyone but Arizona since 1986. A win against USC to finish off the season will be icing on the cake.

The economy is affecting recruits and some are staying closer to home so that their families can see their games.

The Washington Huskies committed a minor recruiting infraction by simulating a game day ritual with a recruit on an official visit. Cheaters. I guess you have to expect that from Sarkisian. He is from USC.

UCLA pulled out the win last night against Washington State 61-59.  Nestor from Bruinsnation analyzes the hard fought win. The fact that people are calling the Bruins a "bubble team" is ridiculous.