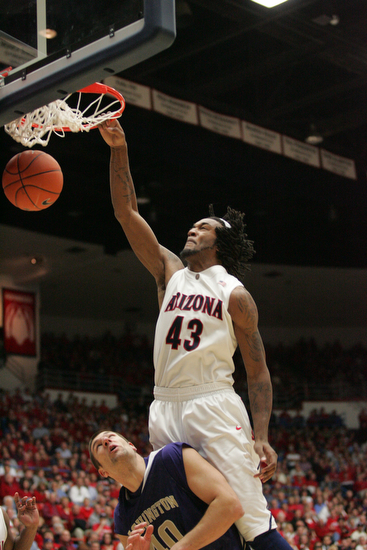 The Outcome was: Impressive. Arizona was trailing by one at halftime only to explode in the 2nd half with 69 points to take the victory by 9 points.  It seemed like everything was falling for the Cats from layups, mid range jumpers, and deep three pointers. Although Arizona has struggled on the road this season, there is no doubt that we can play with anybody at home. Washington went on a run towards the end of the 2nd half to pull within three, but Arizona's strong free throw shooting kept the Huskies out of the win column. The Cats his 34-40 free throws in the 2nd half.

The Offensive MVP was: Nic Wise. Unbelievable yesterday. Where has that been all year? The guy is 5' 10" and strokes like Clarence Carter:

29 points was a career mark for Wise. 14-14 from the line is unbelievable as well. Nic had 3 rebounds, 8 assists, and 4 turnovers in the game.  He was 3-7 from beyond the arc. The little man created for his teammates all night and was by far the best Wildcat on the floor yesterday. Solid night my friend. Keep it up.

The Defensive MVP was: Whoever contested Isaiah Thomas. He ended up with 15 points in the game but was 0-7 beyond the arc and never got going. That kid is going to be a stud in the next few years. 97 points allowed is still perplexing to me. It didn't help that Jordan Hill got his 4th foul with 14:40 in the 2nd half and had to ride the pine. Jon Brockman absolutely dominated yesterday and notched his 10th double double of the year.

Bench: As I stated in the Preview here, we needed solid minutes from our bench because of the pace of the Huskies. I think we accomplished that yesterday with Jamelle Horn giving the Cats a solid 29 minutes and Fendi Onobun putting in a solid 13 minutes. Each scored 6 points, however; Onobun did it on 1-2 shooting and was 4-5 from the free throw line while Jamelle Horn was only 1-7 shooting and 3-4 from the line. Minutes is the key word here. These guys came in, played hard, played defense and allowed the starters to catch a breather while producing  points a piece. Jamelle Horn also had 6 rebounds in his 29 minutes.

Stat of the game:  15 points. 4-4 from the field. 6-6 from the charity stripe. 3 rebounds. 3 assists. Guess who? Kyle Fogg. That's right. The freshman played 31 minutes and was absolutely amazing. He was truly the man tonight while Zane Johnson was as ineffective as ever. I can't even imagine what we would be like if everyone was on at the same time. Coach Pennell on Josh:

"I thought Kyle really stepped up and was willing to handle the ball pressure," said UA interim head coach Russ Pennell. "… He just gets better and better. I don't think he plays like a freshman anymore."

Overall:  The Wildcats put on a show last night for the crowd and those of us watching on T.V. 106 points is a lot and should give us confidence to take on Washington State tomorrow. Check back in later for the Preview on the Cougs as they are riding high as well after going to Tempe and upsetting #14 Arizona State.