What's Happening around U of A

Share All sharing options for: What's Happening around U of A

In a brief look at some other sports around the University of Arizona, it's been a good week for the school as a whole:

The Wildcats (9-2) softball team destroyed Utah and North Dakota State on the opening day of the Wildcat Invitational. The cats showed their power with 4 home runs against Utah. In that game Lauren Schutzler had four RBI's, two runs, and a HR. Lindsey Sisk picked up the win.She allowed 1 run on 3 hits and struck out 4. She improved to 4-2 on the year. 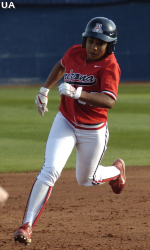 Against North Dakota State Lauren Schutzler also was 3-3 with three runs and three RBI's. In this game Laine Roth was 2-3 with two runs, three RBI's and a HR. Sara Akamine picked up the win allowing 0 runs on 2 hits. She struck out 3 in 5 innings. She improved to 5-0 on the season.

GYMNASTICS
The #19 Arizona Gymcats won their third meet in a row by defeating Arizona State yesterday. They hope to keep the streak alive in Berkley, next Sunday at 2:00.

Next Game: Arizona will take on San Diego State (#50) on Sunday at 10:00 a.m. at LaNelle Robson Tennis Center.

WOMENS TENNIS
The Women's Tennis team (#75) didn't fare as well as the Men's team this past match. They were beaten by #63 San Diego State on Friday 4-3. A few bright spots on the team is Danielle Steinberg who is undefeated on the season in singles for dual matches. Also undefeated is freshman Sarah Landsman.

MENS GOLF
The Arizona Mens golf team surrendered a 6 stroke, 2nd round lead to fall into 3rd place at the John A. Burns Intercollegiate. Arizona's Tarquin MacManus finished 2nd overall. The Cats are still looking for their first win of the season.

WOMENS GOLF
The Womens golf team starts their spring portion of the schedule this weekend in Puerto Penasco, Mexico. All 10 players on the Arizona roster will participate.  Get the full preview here.

Next Up: March 2 and 3, Braveheart Invitational in Beaumont, California.