Arizona State is a #4 seed heading into tomorrow's tournament, up against #5 Arizona.  The Sun Devils have lost 3 of their last 4, but could easily have won 2 of those games.   They have definitely secured a place in the Tournament and are looking for their first  Pac-10 Tournament Championship.  The Sun Devils are armed with three potent weapons and a plethora of other feisty starters and bench players that have given the Cats trouble this year.  James Harden, the Pac-10 Player of the Year, leads the Sun Devils, while his supporting cast of Jeff Pendergraph controls the paint and dead-eye Rihard Kuksiks can be potent from beyond the arc.  The Sun Devils have also enjoyed incredible play out of Derek Glasser and Jamelle McMilan off of the bench.  When these guys are on, they are tough to beat. 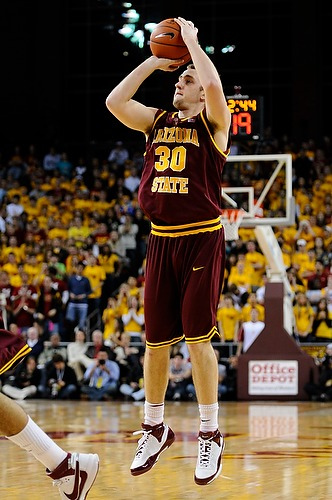 The Sun Devils lost three out of their last four games, two of which went into overtime.  The first was a loss at Washington 73-70 and the next was to Washington State 51-49.  The Sun Devils returned home to Tempe, only to be beaten on their home court by Stanford 74-64.  Fortunately for the Sun Devils, their play throughout the year has landed them as a lock for the NCAA Tournament, and their falter at the end of the year won't cost them too much in terms of seeding.  The negative side to that is they draw Arizona in the first round of the Pac-10 Tournament who desperately needs a strong showing to solidify their chances of playing after the Pac-10 Tournament.

Look for the Sun Devils to move the ball around the perimeter in order to get Harden or Kuksiks a good look from outside.  If it's not there, they should dump inside to Pendergraph and try to get him going.  As we have looked at all week, Jordan is going to have to play Pendergraph one on one.  We can't afford to double team the Sun Devils while their sharpshooters sit outside and wait to unload.  If Arizona's gameplan of shutting down Pendergraph, while effectively challenging three pointers does work, look for Harden to try and take over by cutting to the hoop.  These guys are loaded, ready, and can drop serious bombs.  Let's take a look at their stats so far this season:

The Arizona Wildcats are also on a downward slope, losing 4 of their last 5 games in a variety of disgusting fashions.  Their achilles heel of the last 10 games has been their three point defense, which  we discussed in detail here.  As far as their players go, the big three of Nic Wise, Chase Budinger, and Jordan Hill have each enjoyed incredible success over the season, especially the latter half.  Arizona was counted out this year by many, but after an unfortunate face stomp in the Houston game, the Cats got their act together and went on a 7 game winning streak, beating Washington and UCLA during that span.

The Cats have struggled to find their fourth and fifth players who can contribute quality minutes and really bring the whole team together as a unit.  At one point, the guy was Zane Johnson, who displayed some great shooting and defensive efforts.  His luster faded and recently it has been Jamelle Horne who has been the fifth starter, alongside Kyle Fogg as the fourth guy.  This combination seems to be a better fit, with Zane coming off of the bench, giving Horne more minutes. 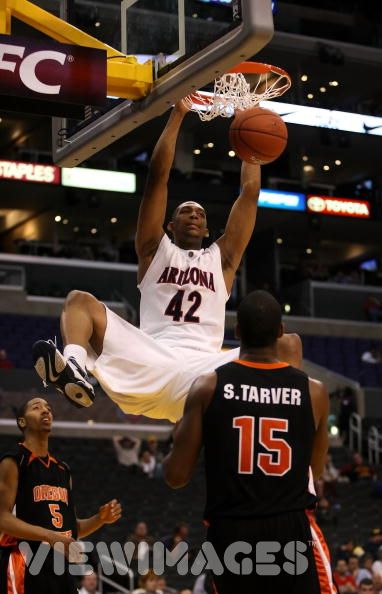 Better fit than Zane. He's the fifth, for sure.
(Photo by Stephen Dunn/Getty Images)

The Cats are still strongly considered on the "bubble" for making the Tournament on Selection Sunday and many think that they need to win at least one game in the Pac-10 Tournament to be a lock for the NCAA Tournament.  Their 19-12 record is impressive, with non-conference wins against Kansas and Gonzaga along with wins over UCLA and Pac-10 regular season champs, Washington.

Look for the Cats to try  and speed the tempo of this game.  I would hope that the press would be eliminated, as the Sun Devils have played Arizona twice this year, and had no problems beating it either time.  Our bench is not deep enough to get into foul trouble, or be winded from press mumbo jumbo.  I am also anticipating better three point defense out of our guys tomorrow and hope that Pennell has been hammering that all week.  Jordan Hill is going to have to match up on Pendergraph one on one to allow the rest of the Cats to match up with their guys.  Easy task if you ask me. Let's take a look at the Cats stats this season:

Keys to the game: