Share All sharing options for: Arizona vs. Arizona State Recap 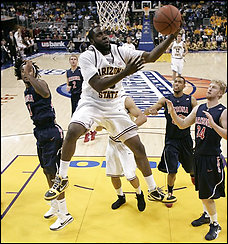 The Wildcats lost yesterday to the Sun Devils 68-56 in what very well could've been their last chance to prove they are NCAA Tournament worthy. The story of the game was Arizona's inability to shoot all game, finishing 35% from the field and 23% from 3 point territory. The Cats proved yet again that they are unable to win on the road and that will not bode well for them on their tournament résumé. The Wildcats walked off the floor to chants of "NIT! NIT! NIT!" from the Arizona State fans.

Arizona actually led the game at the midway point by a score of 34-32 and looked to be in good position to advance to the Pac-10 semifinals. The Cats were shooting 48% from the field and 33% from beyond the arch. Arizona State already had two of their best players in Pendergraph and Harden with 2 fouls each, while not one Wildcat had more than 1 foul. It was looking good for U of A, until the 2nd half came and everything went downhill.

Here's where it all fell apart for the Cats. They lost the 2nd half 22-36 simply because they couldn't score. They finished the 2nd half 9-35 (25%) from the field and 2-12 (16%) from beyond the arch. The breakdown was largely because of Chase Budinger's really terrible shooting day as he went 3-15 from the field and 1-9 from 3 point territory. The defense wasn't that bad for the Wildcats, but it's very difficult to play defense well enough to make up for such an offensive slump.

The Outcome was: Terrible. Arizona was all but a lock for the tournament if they could just win this one game against their biggest rival. The Sun Devils had to have taken the utmost pleasure in possibly knocking the Cats from the big dance with their win.

The Offensive MVP: Nic Wise. Nic didn't have his best game, but he still carried the Cats as much as he could. The Junior point guard shot 42% from the field and 40% from three point land, a slight drop off from his 100% shooting against Stanford in their last game. His 18 points were 2nd only to Jordan Hill who racked up 20.

The Defensive MVP: Jordan Hill. Hill actually led the team in steals with 2, which has to be a first for the season. Jordan was a rebounding force in this game adding 13 to the team's total, 8 of which came on the offensive end. Unfortunately for the Cats, Hill was unable to contribute any blocks in the loss.

Bench: Zane Johnson, David Bagga, and Brendon Lavender. After bench I really should've just put N/A because their performance was terrible, and by their performance, I mean Zane's performance. Arizona's total bench points for the game was a whole whopping 2 points from Zane in the first half. In the 2nd half the bench added a large goose egg to the total points.

Stat of the Game: Bench Points. 2 points from the bench is my stat of the game because it just helps to remind me of how bad the bench is for the Wildcats. It's painfully obvious that this team has 3 players carrying it every step of the way. Kyle Fogg and Jamelle Horne have just played well enough to earn starting spots, but nobody else has even made a case that they deserve to get minutes at all.

Overall:  This game made me feel like Debbie Downer as I can't help but feel that the Cats not only wont make the tournament, but they don't deserve a berth either. Don't get me wrong, I'll be hoping and praying come Sunday, but I don't think a team that is 2-10 on the road deserves to be in a tournament that will not be played in their own court.