The Wildcats beat the Wolverines from Michigan last night in a great defensive battle 2-0 in front of 1,117 fans at Jerry Kindall Field.  The shutout was the Cats second on the year and first against a ranked opponent.  Preston Guilmet was impressive, earning his second victory, by going six innings, striking out eight.  He allowed six hits and three walks  as well.  After giving up a lead off double in the top of the seventh, he turned the ball over to Arizona reliever, Jason Stoffel, who had no problems finishing off the Wolverines.  Jason was impressive in his role as well, pitching three innings, only giving up one hit and one walk, while striking out four to earn his fourth save of the season. 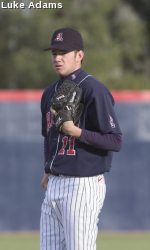 Preston Guilmet had a hell of a game.

The Arizona offense had to battle in their own way to come out on top of this one.  Michigan senior Chris Fetter had a solid day as well only giving up two runs, both earned in 7.1 innings of work while striking out two.

The Wildcats got out to an early lead in the bottom of the third when freshman Kyle Stiner singled to start the inning. He was moved over to second base on a sacrifice bunt by Dwight Childs and scored on an RBI single by Hunter Pace.  The Cats added their second run in the bottom of the fifth when Childs smashed a one out triple to right field. He later scored on a wild pitch by Fetter.

Arizona changed up its lineup for this one moving Bryce Ortega to the second spot in the order, allowing Jett Bandy to move up to the fifth spot as well.  This move almost paid immediate dividends as the Cats loaded the bases in the bottom of the eighth and Jett Bandy came to the plate. He hit a huge shot to deep left field but it was tracked down by the Michigan left fielder at the warning track.  These are the kinds of opportunities that present themselves because of the order the coach puts his guys in.  Great adjustment after the Oklahoma State series. Steve Selsky, who has been struggling as of late, was moved down to sixth in the order. He was 0-3 with two strikeouts.

I think that the lineup against the Wolverines is the best fit right now: Valenzuela to leadoff, followed by Ortega, Glenn, Coyle, and Bandy.  When Dillon Baird is playing, which he was not against the Wolverines, he should be put in Coyle'sspot, who should move to the sixth spot.  Speaking of Baird, he has been out of the lineup for the last three games.  He did not play either game against Oklahoma State or the Michigan game.