Arizona defeated Michigan yesterday 9-7 in front of 1,309 fans at Jerry Kindall Field. Dillon Baird returned to the lineup  and delivered a monster 2 run HR in the eighth inning. Matt Veltmann continues to struggle on the mound, pitching only 2 innings, allowing 5 runs, 4 earned on six hits and two walks.  Kyle Simon came in and shut down Michigan for four innings only giving up three hits.  Unfortunately, the score was 5-0 before the Cats got out of the jam.

In the bottom half of the third inning, the Cats scored six runs to take the lead 6-5. Michigan starter Eric Katzman walked Bryce Ortega, then hit Brad Glenn with a pitch and walked Dillon Baird. to load the bases with no outs.  Rafael Valenzuela, batting in the leadoff spot, hit a two out double to clear the bases, which were loaded for him. 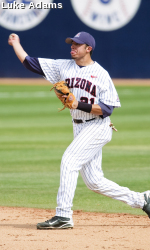 Cory Burns and Jason Stoffel came in to  pitch the final three innings, with Jason getting his fifth save of the year.  The pitchers combined to allow only one hit, and struck out six combined. Five of those strikeouts came from Stoffel, who only pitched to five batters.

The Cats lineup yesterday was Valenzuela, Ortega, Glenn, Baird, and Bandy.  This is the ultimate lineup for us. I don't know why Dillon Baird has been out of the lineup for the past few games, and the Arizona Athletics page says nothing, but he is a key component to the first five.  Hunter Pace, who is slugging .568 % is in the 9th spot.  I am not sure why he is batting ninth, but this may be done in purpose by Coach Lopez to try and spark late production in the order. I hope Baird is back for good.

Next Up: Looking for the sweep against Michigan today at 11:00 MST.