Share All sharing options for: Snapshot of Utah Utes

The Utah Utes reign from the Mountain West Conference, winning the conference championship 52-50 over San Diego State.  They went 24-9 on the season and 15-4 in conference play. The Utes started off the season on shaky ground, falling to Southwest Baptist 79-80 on their first game of the year.  They lost three in a row to Idaho State, California, and Oklahoma to bring their season win loss to 5-4.  The Utes started gelling around this point and won 15 of their next 17.

The Utes are led by Senior Luke Nevill, who averages 16.9 ppg and 2.7 blocks per game.  He is definitely a force to be reckoned with and will be the tallest player the Cats will face all year. 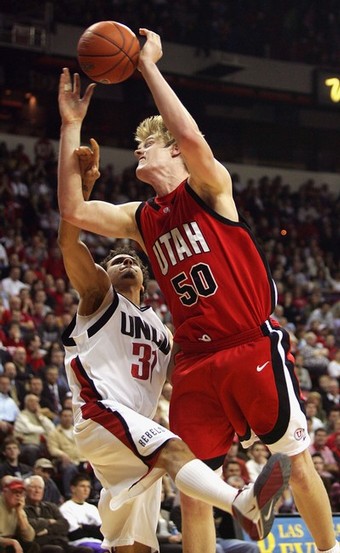 Nevill will try to wreak havoc.

The Utes have an array of other players who contribute on a nightly basis.  Lawrence Borha is a guard, who averages 11.7 ppg. Shaun Green and Tyler Kepkay also average over 10 ppg. Carlon Brown averages 19.4 ppg and 3.2 assists as well.

The Utes have won four in a row, including two games against TCU, Wyoming, and San Diego State.  They have also lost two of their last road games, at BYU and at New Mexico State.