Share All sharing options for: Arizona vs. Utah Recap 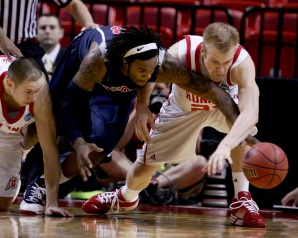 The Wildcats played a great game yesterday and won 84-71 over the Utah Utes. Arizona shot 54% from the field and 33% from behind the arch to build up a solid offensive showing, but it was their defense that won the game. The Cats came out in a full press from the first possession and kept it up the entire game, forcing 19 turnovers from the Utes. 13 of those turnovers came off of steals by the Wildcats. Utah's 7'2" center, Luke Nevill, got in foul trouble early and only played for short stretches at a time which opened up the middle for Arizona to play in. The Cats outscored the Utes 51-31 in the paint as Chase Budinger and company attacked Utah's interior defense throughout the game.

Arizona won the first half 34-29 after 14 turnovers from Utah. Arizona's 9 turnovers made the game closer than it should've been even after the Utes only scored 2 points on a 6:50 stretch early in the half.

1st Half MVP: Chase Budinger - 12 points, 4 rebounds, 2 assists, 3 steals. 3:40 into the first half Luke Nevill got his 2nd personal foul and no one took better advantage of the situation than Chase Budinger. He drove to the hoop many times and received no contest inside. When Luke Nevill was in the game Chase saw the "olé" defense as Nevill didn't want to pick up a foul. When Nevill was out, nobody on the Utah team could bring any inside presence.

The Utes kept better control of the ball in the 2nd half, only committing 6 turnovers; however, the Cats also did better committing only 5. The story of the second half was offense as Arizona shot 62% from the field and won the half 50-42.

2nd Half MVP: Nic Wise - 21 points, 1 rebound, 1 assist. Wise didn't have a very strong 1st half, only recording 8 points and 1 assist, but in the 2nd half he couldn't be stopped. For the game, Nic shot 53% from the field and did a good job organizing the Arizona offense in the 2nd half.

The Offensive MVP: Nic Wise. Most of his performance was based on his 2nd half showing, but at the final whistle the Arizona point guard had 29 points and 2 assists. The junior shot 10-19 from the field, 2-3 from beyond the arch, and 7-7 from the free throw line.

The Defensive MVP: Jordan Hill. After Luke Nevill got into foul trouble the Utes lost their only inside presence in the tournament. As a consequence Jordan Hill dominated the boards, recording 13 rebounds. He didn't add any blocks, but actually added 2 steals to add to the Utah turnover total.

The Overall MVP: Chase Budinger. His performance was well rounded as he was both a force offensively and defensively. On the offensive side, Chase added 20 points to the Wildcats' total, shooting 57% from the field. He also acted as a great facilitator for the offense, dishing out a team leading 6 assists. Defensively, he created the greatest pressure for the Wildcats, recording 4 steals and 1 block. It was a great game for Chase that he really needed as he has been very cold as of late.

Bench: Zane Johnson, Brendan Lavender. Usual Arizona stats from the bench with the only points coming from Zane Johnson. Zane added 3 points on one shot very early in the game and the bench was not heard from again. Brendan Lavender got 8 minutes on the floor after Jamelle Horne and Zane Johnson got in foul trouble and he added 1 assist with 0 points.

Stat of the Game: 27 minutes from Luke Nevill. The biggest impact player for the Utes saw very limited time after Jordan Hill managed to get him in foul trouble early. Everyone benefitted from Nevill's absence and the entire dynamic of the game was turned upside down.

Next Up: #13 Cleveland State