Getting to Know the Cleveland State Vikings

Share All sharing options for: Getting to Know the Cleveland State Vikings 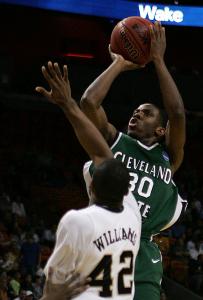 The Cleveland State Vikings are the cinderella of the tournament now after advancing to the second round in their first ever NCAA tournament and busting a large percentage of the nation's brackets. The #13 seeded Vikings upset the #4 seeded Wake Forest Demon Deacons Friday night by a score of 84-69. Last night was the first time most of the nation, me included, got a chance to watch Cleveland State play and it was impressive. So was it a great game by Cleveland State or a bad game by Wake Forest? Or maybe even a combination of the two? Let's take a look at the stats of the Cleveland State Vikings for the season and find out what they're all about:

The Vikings love to slow games down and minimize the amount of points put on the board. West Virginia was averaged 74 points a game this season, but only managed to put up 53 against Cleveland State. Wake Forest was averaging 81 points a game, yet they only put up 69 on Friday.

The Vikings are a very tough team that holds brutal practices. In a Sports Illustrated article, Andy Staples wrote about the Cleveland State practices:

At Cleveland State, they don't call fouls at practice. Coach Gary Waters, who led Kent State to a first-round upset of Indiana in 2001 before he left for five miserable years at Rutgers, installed that rule when he arrived in Cleveland in 2006.

During rebounding drills, boundary lines do not exist. If the ball bounces into the stands, go get it -- even if you have to crawl over the bodies of your teammates.

"We almost lost a guy the other day," Waters said, recounting the tale of freshman guard Josh McCoy, who crashed over a railing this week chasing a carom.

When two opposing players grapple for the ball, no one races in to call a jump ball. "We let 'em wrestle for it," said Waters, who added that matches can last as long as 30 seconds.

I'll write a follow up about what the Cats will need to do to shut down the Vikings on Sunday.