Share All sharing options for: Arizona vs. Cleveland State Recap

Sweet. One. Six. Arizona completed their first and second round thrashings by beating Cleveland State 71-57.  The Cats jumped out to a quick 7-0 lead in the first minute and a half and never looked back.  The Cats got another solid performance from the big three and a fourth finally emerged.  Jamelle Horne cashed in by hitting for 15 points, 5 rebounds, and 2 blocks.  He played 38 minutes and was 5-11 from the field.  On the flip side, Kyle Fogg played 37 minutes and had a horrible stat line. He had 2 points on 2 field goal attempts, 5 rebounds and four steals.  However, Fogg has definitely ramped up the defense in the last 5 games. 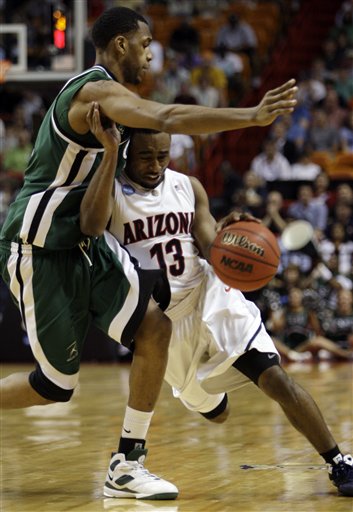 Arizona employed their zone defense and was able to eliminate the inside threat from Cleveland State. The Vikings were forced to shoot over the Cats and started the game 0-11 from three point land and finished 3-23 (13%) for the game. Cleveland State's J'Nathan Bullock said,

"I couldn't find my shot," Bullock said. "Some nights that happens. It's tough when it happens in the second round of the NCAA tournament. When you play a zone, you have to make your open shots. We weren't able to do that."

Meanwhile, the Cats shot 50% from the field, going 22-44.  They only took 11 shots from beyond the arc, hitting on three of them.  Arizona was an incredible 24-28 from the FT line, connecting on 85%. Nic Wise was incredible, scoring 21 points on 5-7 shooting from the field and making 10-10 free throws. He also had 8 assists and 5 rebounds. Chase and Jamelle each contributed 15 points, while Jordan Hill had 16 points and 8 rebounds.

The Outcome was: Incredible. Nobody thought the Cats would make it to the sweet 16. The Cats came out this past week and had great showings against Utah and Cleveland State to send them into the third round.  Wake Forest's surprise loss in the first round definitely opened the door for the Cats in the second round, as the Demon Decons would have proved to be a nightmarish matchup for us. Hey, who cares? We still dancing..

The Offensive MVP: Nic Wise. The dude is clutch. He only took 7 shots from the field. Why so little? Because he was getting hacked every other time he shot or he was dropping dimes to his teammates, showing up in his stat line with 8 assists on the day. At one point, they were trying to deny him the ball on every inch of the court just so they didn't have to deal with him. Silly Vikings.

The Defensive MVP: Anyone with long lanky arms. Chase. Jamelle. Jordan. Our zone defense was very effective against Cleveland State. We challenged almost every shot and the Vikings stat line is low for a reason, not just that they couldn't hit. We are going to have to watch out against Louisville though, because they aren't going to be phased by a hand in the face. Their forwards are just as tall and lanky as ours and can elevate to get good looks.

Bench: Why do I still do this? Poor Zane Johnson. 12 minutes, 1 attempt, 2 free throws. Why does he only shoot three pointers when he comes in? Maybe he would get off the bench if he could show some ability to drive to the hoop. We may need Fendi, Zane, and Brendon against Louisville if we get into foul trouble.

Stat of the Game: Nic Wise FT shooting and Jamelle Horne's whole line. Nic Wise was 10-10 from the charity stripe on Sunday. This guy is crazy. At least we know who to get the ball to when we are winning and need to make our FT's late in the game. I was also very impressed with Jamelle Horne's whole performance. The Cats are almost unbeatable when we have 4 guys scoring in double digits. I initially thought Kyle Fogg was going to come out the stronger of the two, but Jamelle is peaking right now and it's really fun to watch.

Overall: What else is there to say. We are in the Sweet 16 and people didn't even think we should be in the Tournament. Also, we are the only team left from the Pac-10 standing. USC laid a serious egg yesterday against Michigan State and Washington was my biggest disappointment of the weekend. Congrats to Coach Pennell and the whole squad.