Snapshot of the Louisville Cardinals

Share All sharing options for: Snapshot of the Louisville Cardinals

The Louisville Cardinals are this year's number 1 overall seeded team in the Tournament.  They will be playing only 114 miles away when they take on the Wildcats in Indianapolis on Friday.  They are likely to have a huge home court advantage, unless Arizona fans make the trip from the heavily alumni populated Chicago.  Louisville has gone 2-0 in the Tournament by defeating Morehead State 74-54 and Siena 79-72.  They put together a tremendous season going 28-5 in the regular season and 19-2 in the strong Big East conference.  They won their first Big East Conference championship by defeating Syracuse 76-66.

Earl Clark leads the Cardinals averaging 13.9 ppg.  He is shooting 45.3% from the floor and grabs 8.8 rebounds/game.  Louisville only has three players who average in double digits.  This obviously does not translate into a weak team. The Cardinals also have eight players who have played in 30+ games this year.  They are the epitome of a team, and their strength lies in their depth. 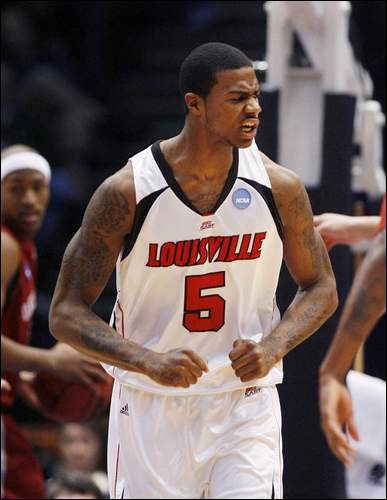 The Cardinals are led by coach Rick Pitino, who has been rumored to be courted by Arizona to be their next head coach.  Louisville has won 12 games in a row dating back to February 12, 2009.  Louisville averages 73.9 ppg and hits 36% of their three pointers.  Arizona's three point defense is obviously going to play a huge part in this game. Expect the Cardinals to go to their bench often and try to wear out the Wildcats. Check back in this week for the preview to the game and hopefully a Q&A from CardChronicle on the game. Here are the team stats from Louisville so far this year: