Share All sharing options for: Arizona vs. Louisville Preview

I want everyone reading this to think about something real quick. By the time Arizona's game starts tomorrow at 4 PM there will only be 12 teams in the nation still eligible to be national champions. Our Arizona Wildcats will be one of those teams. We had seen flashes and stretches of brilliance out of this squad, but I'll be honest; I didn't think the Cats would get this far. 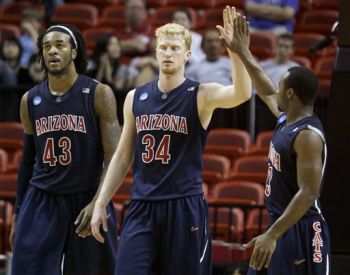 Everyone's debating it now. Are the Wildcats really that good or are they benefitting from the easiest couple of matchups in the tournament? The other bloggers in the Pac-10 sure seem to think the latter. I'll admit that the Wildcats didn't get the toughest pair of opponents for a 12 seed, but they aren't getting the full respect they deserve for how well they've played.

They won both their 1st and 2nd round match ups by 13 and 14, respectively. Against Cleveland State the Cats shot 50% from the field and against Utah they shot 54.5%. We've seen it before, when the Wildcats are on their game, they are a force to reckon with.

Against Louisville, the Wildcats may have a good match up, but only with the starting lineups. The depth of the Cardinals may be an issue for the Wildcats so a 4th player and maybe even a 5th strong player is a must. It'll be interesting to see if the Wildcats come out in the same aggressive press that they've been using so far in the tournament. Against Louisville the Wildcats cannot afford to pick up fouls, much less cheap press fouls.