The Arizona Wildcats put the hurt on UCLA yesterday, scoring 19 runs en route to their first Pac-10 win of the season. Junior catcher, Dwight Childs, had an offensive explosion, going 5-5 with four runs, four RBI's, and hitting his second HR of the season. 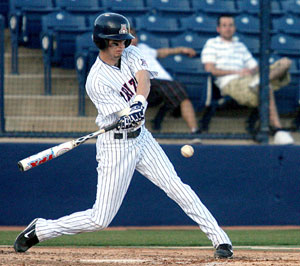 The Cats finally got a quality start out of one of their pitchers with Matt Veltmann going six innings, allowing only three earned runs on six hits and two walks. By the time Veltmann was done, Arizona had put up 15 runs on the board and the game was over. Bryce Ortega, batting in the leadoff spot, was 3-5 with three runs and three RBI's. Dillon Baird, batting in the cleanup spot was 3-4 with one RBI, and scored four times. Baird also drew two walks in the game. Shaun Cooper had a huge game as well, going 3-5 with 5 RBI's and two runs scored.  Donn Roach pitched the final three innings to get his first save of the year.

Where has Cooper been all year? He only has 16 at bats for the whole year.  Looks like we are still trying to find the right lineup to maximize our potential. I am glad that Baird is hitting in the four hole though.