An update on the other sports of U of A: 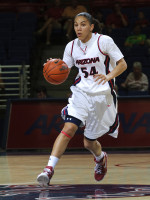 The Wildcats(11-16, 4-12) won on Senior Day against the Washington Huskies(6-21, 2-15) on Saturday to eclipse their win total of each of the last two seasons. Freshman Courtney Clements (pictured above) led the Wildcats with a game high 22 points and also dished out 4 assists in the victory. They will finish their season this week with a trip to #2 ranked Stanford(24-4, 15-1) on Thursday and #9 ranked California(14-2, 23-4) on Saturday.

At the self-hosted Wildcat Invitational (2/22-2/24) in Puerto Penasco, Mexico, the women's golf team finished 6th out of a 17 team field. The Wildcats were led by Alejandra Llaneza (+4), who finished in a tie for 14th overall, 7 strokes behind tournament winning Jodi Ewart of New Mexico and Lizette Salas of USC. The Wildcats will be traveling to Florida for the UCF Challenge starting Sunday in Sorrento, FL.

The #16 ranked gymnastics team of Arizona won their 4th in a row by a score 194.625-191.375 Sunday against California in Berkeley, CA. The Wildcats will hold their final home meet of the season Friday against Denver in McKale.

"We're very happy with the win, but we'd like to be above the 195 mark," said Arizona head coach Bill Ryden. "We had some good performances, but feel like we could have been better."

In a matchup between Texas A&M and Arizona on Sunday, the #21 ranked Aggies battled back from a 3 run deficit with 2 outs in the bottom of the seventh to force an extra inning. In the 8th the Aggies walked off with the victory after a bases loaded walk was issued thrown from Wildcat pitcher Lindsey Sisk. In the 4th inning, Arizona catcher, Stacie Chambers, hit her 9th home run of the season to center adding two more RBIs to her national leading total. In the next 5 days the Wildcats will be very busy, hosting eight games in that span.

In the Pac-10 swimming championships last weekend the women's swimming team finished 2nd behind the California Golden Bears by 211 points, but managed to edge the Stanford Cardinal by 22 points. The team will now begin to train to defend their national title at the NCAA Finals which will be held March 19-21 in College Station, Texas.

In the latest ITA (Intercollegiate Tennis Association) the Wildcats are ranked #17, the highest rankings for the team since the '81-'82 season.

“I am really proud of the guys and how hard they have worked,” head coach Ted Berkowitz said. “I am really happy for the upperclassmen that were part of the team a couple years ago who were not even ranked in the top 75. This just shows how far we have come.”

The Wildcats will take this new, high ranking into the weekend when they play #70 New Mexico State and #75 UC Irvine.