Share All sharing options for: Arizona vs. California Recap 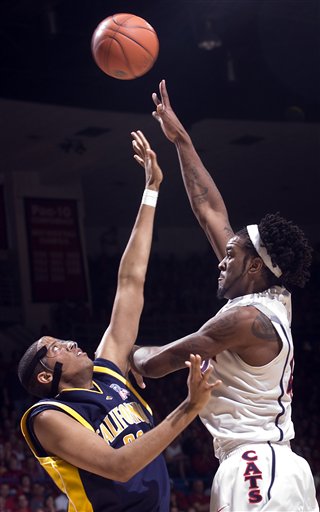 Here we are again. After getting up by 12 points in the first half, we surrender to another push in the first half only to be clobbered in the second. What's the deal? Why are we on such a script? This is the same thing that happened against Washington State. Fatigue? Foul trouble? Bitter at Lute? Didn't like the halftime festivities? There is one thing for sure, we better beat Stanford tomorrow or the bubble talk may disappear. On paper, I can see how the Cats may deserve a bid, however; the way the season is ending is not what you want to bring to the Tourney.  That will play a part in the selection. Let's get to the recap:

The Cats started off nicely against Cal by working a nice inside out game. Jordan shot the first two shots in the half, then we hit'em with a 3 from Nic. This set the tempo for the Cats, who took a nice 23-11 lead mid way through the first.  Zane Johnson sat to start the game with Jamelle Horne taking his place. He turned in a nice game grabbing 9 rebounds and scoring 13 points. I like coach Pennell's strategy on this one and thought it paid off. Unfortunately, Nic got into a little foul trouble and had to sit for some minutes in the first half.  He ended up only playin 31 minutes of the game, well below his season average of 36.2.  Cal went on a 23-15 run to head into the locker room only down by 4.

Cal wasn't quite on their game to start the game off, but started getting hot towards the end. Theo Robertson made 2 three pointers in the last 2:41 to help revive the Bears at the end.  His last one was killer.

Just like the Washington State game, Cal comes out and hits two quick buckets and we're tied before we can even break a sweat in the 2nd half.  Arizona battled back and took the lead a couple of times from Cal, but in the end, they had a guy, I don't know, maybe you've heard of him, named Jerome freakin' Randle, who started tossing three's up like nobody's business. He was literally unstoppable. He ended shooting 8-11 from beyond the arc and turned in 31 points. The Cats led 45-41 when Cal went on a 9-0 run (all three's) to take the lead 50-41.

The Cats didn't give up at that point either. They battled back to take the lead 51-50 on some buckets by Chase and Jordan added on to a couple of free throws from Jordan as well. The game teetered until 4:13 left in the 2nd when we were down 65-63 and Nic was whistled for an offensive. Jerome freakin' Randle came down the court and made us pay by smoking a three pointer to put Cal up 68-63.  The Cats cut it to 68-65, only to have Randle hit another 3 late in the game to basically seal the victory.

The Outcome was: Disheartening.  Another big lead, another collapse.  Fading in the 2nd half is frustrating to say the least.  Panic time? Maybe. Crunch time? Definitely. Russ Pennell said,

"I still think there is enough opportunities to accomplish our goals. Is the margin of error thin? Yes it is. But I still think it's there. There is still hope.''

"There is still hope." = Panic time. Let's hope that he can gather his troops for Saturday against a very dangerous Stanford team that just went to Temp and whooped Arizona State by 10.

"To say I'm disappointed would be an understatement,'' Pennell said. "I felt like we played hard, but I didn't think we played smart at times. I thought our effort was good (and) I thought that was a good basketball team that beat us, too. That's an NCAA Tournament team. They've been doing that all year.''

What? You're an NCAA team too. Ummm. Right? You think so, right? Good. Me too. Who cares if they are an NCAA team. They are Cal. In Tucson. You had a 12 point lead. Subconscious degradation of the Cats pisses me off.

The Offensive MVP was: Maybe not MVP, but I am going to go with Jamelle Horne. 13 points after getting the nod over Zane Johnson is impressive. That's the kind of 4th player we need to have on the court. He also added 9 boards, 3 of them offensive.

The Defensive MVP was: Jordan Hill. Almost all of Cal's production came from outside the paint. It's amazing to me that you can have a guy like Jordan in the middle, yet still defend the three pointer so terribly. Talk about time to change on the fly. Let's extend that zone to cut down on opponents three pointers and let Jordan handle the middle by himself.

Stat of the game: 8-11. Don't make me tell you what that is. It's depressing. Hint: It's not our stat.. Kyle Fogg also only shot 3 times. We have got to have someone step up.

Overall:  We better get ready for Stanford. (The only team in the Pac-10 without an SBN blog, know anybody?) who dropped ASU for their 3rd loss in a row in Tempe last night. I thought this one was going to be a for sure winner, but now I am not for sure about anything. Am I the only one who thinks that our NCAA tourney bid is coming down to this one game?

Next up:Saturday at home against Stanford.