Share All sharing options for: Arizona Baseball Keeps On Rolling 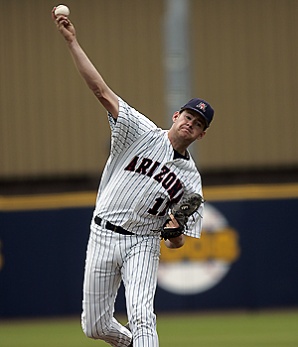 Arizona won its third in a row beating Umass 13-4 yesterday at Jerry Kindall Field.  Preston Guilmet pitched 7.1 innings, giving up 4 ER, on 11 hits, 2 walks and struck out 5.  It was Preston's first win of the year.   Brad Glenn, Dillon Baird, Matt Preston, Codi Harshman, and Dwight Childs each had 2 RBI's in the game.

The Cats had 13 hits overall and only struck out once in the game. That's some plate dicsipline right there. Hopefully, the Georgia series has struck a cord in the dugout and has these guys working their butts off. Sometimes it takes something like that (Ahem, USC game for basketball, or Chase's face being smashed into center court) for a team to gather the troops and settle into their own identity.

Donn Roach will get the start today agains UMASS in the 2nd game of the 3 game series.  Head on out to Kindall Field if you have nothing else going on today.