The Field is Set: A Pac 10 Tournament Preview

Share All sharing options for: The Field is Set: A Pac 10 Tournament Preview 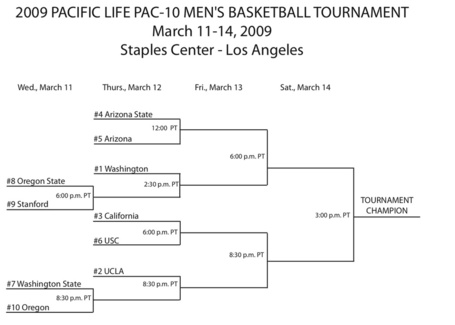 The field for the Pac 10 tournament is officially set and Arizona's win over Stanford Saturday night ensured they probably wont see Jerome Randle again for the rest of the season. As consolation they'll get to see James Harden once again in their Thursday matchup against Arizona State. So let's take a quick glance at the story lines for this bracket and what to look for this week.

You may make fun of me for making such an easy choice if you'd like, but I have to pick the UCLA Bruins and the Washington Huskies, the top two seeds in the tournament.

UCLA Bruins: The Bruins had a rough week in the middle of February when they travelled to Arizona and lost to both the Wildcats and the Sun Devils. They rebounded the following week with a solid win over Washington, but fell again a few days later against Washington State. In the last 4 games of the season, they finished with wins over Stanford and California, and two routs over Oregon State and Oregon.

Washington Huskies: Since losing to UCLA on February 19th the Huskies have not been beaten and they are heading into the conference championship with a 5 game win streak. Add on 3 wins prior to the loss against the Bruins and Washington has won 7 of their last 8.

After picking the #1 and #2 seeds for hottest teams I promise I wont pick #9 and #10 for coldest teams. Instead I'm going to say the Oregon State Beavers and the Cal Golden Bears.

Oregon State Beavers: The Beavers finished the month of February with a pair of wins against Stanford and Cal, leaving themselves in great position to challenge for as high as 5th in the Pac 10. Instead they finished their season with a 10 point loss to Oregon, a 25 point loss to UCLA, and a 16 point loss to USC.

California Golden Bears: Yeah I know I'll probably hear it for picking the Bears as a cold team after beating the Wildcats Thursday, but I'm picking them for their inconsistency as of late. Cal started off their February with 4 straight wins and looked to be a strong force when they started to ride a roller coaster of ups and downs. In fact, in the last 3 weeks the Bears have won every Thursday, but lost every Saturday. After beating Arizona with Jerome Randle's three point shooting they followed it up two days later with a 17 point loss to Arizona State.

TeamRankings.com uses a list of formulas and predictions to come up with numbers that accurately describe each teams chances in the tournament. In fact, I'll let them speak for themselves:

Using win odds calculations derived from our sophisticated power ratings, we analyze the likelihood and expected outcome of every possible path to the Pac-10 tournament championship for every team in the 2009 Pac-10 bracket.