Share All sharing options for: Arizona vs. Stanford Recap

Sorry for the long wait. I have had a busy day. Let's get to it: 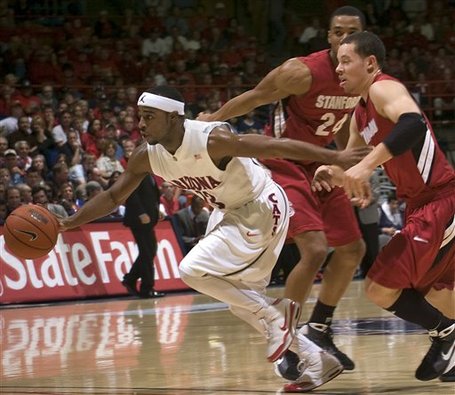 Last night the Arizona Wildcats defeated Stanford 101-87, putting the Cats in great shape for making the NCAA Tournament. Arizona shot an astounding 70% from the field and 62.5% on their three pointers.  What a great game to end the home seson on. Chase matched his season high with 28 and Nic Wise turned in 27, going a perfect 9-9 from the field. What a way to end the season.

The Arizona Wildcats jumped out to a 50-38 first half lead after shooting 71%. This was the Cats biggest 1st half scoring and they were able to hold on to this lead throughout the 2nd half to take the W.  Other than the magnificent shooting,  and Nic being perfect from the field, the score speaks for itself.

Arizona continued to dominate in the 2nd half outscoring Stanford 51-48. Arizona busted out a quick 5 points on a Budinger three and a turnover/Nic layup to make it 55-39.  It got a little scary after a few turnovers and Stanford scoring the next 10 points, but the Cats were able to settle down and get back to work, holding off the Cardinal until the final buzzer. Freshman Jerry Green hit 6-10 three's to lead Stanford with 22 points. Surprise, Surprise. Stanford shot 45.5% from beyond the Arc. More on that later.

The Outcome was: Delicious. Arizona needed a win in the worst way after a four game slide where we looked like we didn't belong in the Tournament. After this whipping of the Cardinal at home, there is no doubt that if Arizona is on, they can beat or kill anybody. I knew we would win at least one of our last four games, I just thought it would be more than that. Stanford never really posed any real problem to the Cats and this was a statement win that should (in my mind) lock up a Tourney bid. On to the Pac-10 Tournament first to face ASU, who has had our number twice this year.

The Offensive MVP was: Nic Wise. Unbelievable performance turning in 27 points on 9-9 shooting. 7-11 from the FT line. 1 rebound and 9 assists. Congrats to Nic on an incredible season and what a way to finish it off. Chase had 28, tying a season high and Jordan Hill had 20 points to lead the Wildcats.

The Defensive MVP was: Jordan HIll. Jordan held his own again, forcing Stanford to shoot from outside, which is the only reason that Stanford was even as close as they were.  What is the deal with our three point defense? That has got to change before the tournament. We'll try and dive into some analysis on this later this week.

Bench: Zane Johnson, Fendi Onobun, Brendan Lavender and David Bagga. More weak story lines from the bench as they combined for a total 3-5 and 1 rebound. A bright spot is Senior David Bagga who got mop up duty and nailed a three to end his career at Arizona.

Overall: What a great way for the Cats to end the regular season, hopefully propelling them into the NCAA Tournament with 19 wins and some momentum heading into the Pac-10 Tournament. Adam has a great writeup on the upcoming tournament. Let's get'em Cats.

Next up:Arizona State in the 1st Round of the Pac-10 Tournament.