Share All sharing options for: Cats Roll 9-0 to Take Series 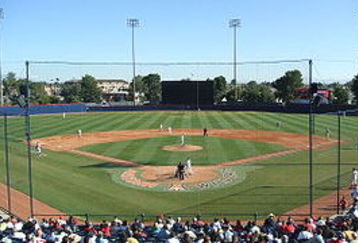 Arizona came back on Sunday and beat UMASS 9-0.  The Cats finally got some great pitching from sophomore Matt Veltmann who pitched 5.2 innings, allowing 0 runs on 4 hits, 2 walks and 5 strikeouts.   It took Arizona five innings before the bats woke up to put some runs on the board. They scored 3 in the bottom of the fifth after Brad Glenn doubled and Dwight Childs reached on a bunt single. Bryce Ortega then sac flied Glenn in to make it 1-0. (Nothing gets me going like a little small ball).  After the sac. Rafael Valenzuela and Bobby Coyle hit back-to-back doubles to make it 3-0.

The game was marred by a benches clearing shoving match after a pickoff attempt at first base. Dillon Baird was on first base when the UMASS pitcher attempted to pick him off. His legs became entangled with the first baseman and shoves were exchanged, causing the benches to clear. In all, six players were ejected, three from each team including Baird and Peter Copa of UMASS.

Wow. What a performance by Veltmann. After losing on Saturday to UMASS, the Cats come back in a big way. They are now 8-5 on the season.  It took awhile for the bats to heat up, but when they did, the Cats really laid it on.  Jason Stoffell pitched the final 3 innings, not allowing a run or hit and only issuing 2 walks and had 5 strikeouts. He picked up his third save of the year.

Next Up: Arizona hosts the Cowboys from Oklahoma State for a three game series beginning on Tuesday at 7:00 p.m. at Kindall Field.