Here's a brief update on other sports at U of A: 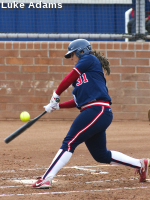 The #11 Wildcats won in dramatic fashion on Sunday afternoon over the Oregon Ducks. Heading into the bottom of the 7th inning, Oregon held a 6-4 lead over the hometown Cats. Brittany Lestrapes led off the inning for Arizona with a walk to get the tying run on first and K'Lee Arredondo took the opportunity, tying the game with a two-run shot. The Ducks then pulled their starting pitcher to put in reliever, Brittany Rumfelt, to pitch to Jenae Leles (pictured above). It took only one pitch for Leles to connect with a game-winning blast to right-center. The win extends the Wildcats record to 31-7 overall and 3-0 in conference play. This weekend will be one of the toughest of the season for the Cats as they are set to play Washington, USC, and UCLA in consecutive days.

#20 Arizona's 14 game win streak finally fell on Sunday afternoon to the #26 Washington Huskies. The Cats just simply struggled to get any momentum going against UW and will have to look to bounce back on Friday against the #4 Stanford Cardinal at home. The first 100 fans in attendance will receive free pom poms to cheer on the hometown Cats.

The NCAA Championships finished on Saturday with Auburn taking home the title, its 6th in the last 7 years. Arizona finished 6th in the event. Junior Jake Tapp had the best individual finish for the Wildcats, finishing as the runner up in the 200 backstroke with a time of 1:38.67.