Share All sharing options for: Baseball Falls on Thursday, Then Upsets #16 Oregon State

Arizona picked up its first win of the season over a ranked opponent, beating the Beavers from Oregon State by a score of 7-6 on Friday night at Jerry Kindall Field. The Cats fell to the Beavers on Thursday by a score of 9-5.  In the first game, Preston Guilment pitched another solid game going 7 innings, giving up 4 runs, only 2 earned and giving his bullpen a 5-4 lead in the eighth inning. Unfortunately, Arizona's closer, Jason Stoffel was unable to hold the lead and gave up 4 runs on 5 hits allowing Oregon State to take an 8-5 lead. The Cats were unable to hmount a comeback and fell to (13-15, 2-8) on the season. 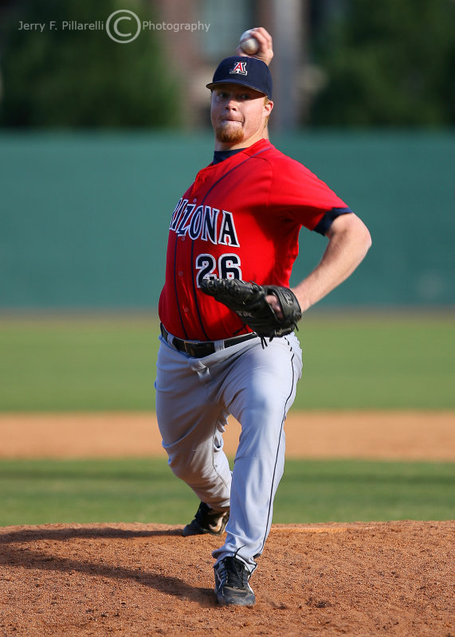 (Stoffel was unable to hold on Friday night)

The Cats (14-15, 3-8) didn't stay down too long as they came back on Friday afternoon and beat the Beavers by a score of 6-5 on Friday at Jerry Kindall Field. Brad Glenn and Dillon Baird are cleaning up in the three and four spots of the order this year. Brad was 2-4 with 1 run and 3 RBI's.  Dillon was 3-4 with 0 runs and 2 RBI's. Bryce Ortega also  scored 3 runs after going 2-4 with a walk.

Kyle Simon was only able to go 4.1 innings surrendering 5 runs, 3 earned on 8 hits with 3 strikeouts and 1 walk. Every time we talk about a pitcher for the Cats I have to include the runs and how many were earned.  2 more Errors against the Beavers. Our defense is a joke. Joe Allison, Bryce Bandilla (hey, he got someone out), Cory Burns, and Jason Stoffel closed out the game for the Cats in the final 4.2 innings and gave up no runs. Stoffel got the save, giving him 6 on the season and padding his record once again.