Kyryl Natyazhko Picks U of A, Budinger Look Alikes Beware

Share All sharing options for: Kyryl Natyazhko Picks U of A, Budinger Look Alikes Beware

Sean Miller is the man. Seriously. Less than one week after arriving in Tucson, he landed the top rated big man left on the board.  Natyazhko is 6'10" and weighs 240 lbs.  Kyrl is originally from the Ukraine but has spent the past three years at IMG Academy in Florida.  He was originally Pittsburgh, Arizona State, and Xavier, however; after Sean Miller was hired, Kyrl placed the Cats in his top three without even taking a visit to Tucson. 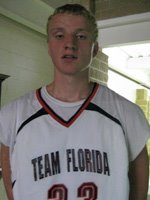 (Put a goatee on him and who does he look like? You see it)

Natyazhko is rated as the ninth best overall center in his class by ESPN and is rated by Rivals.com as the No. 75 prospect in this Class of 2009 Top 150 list.  From the analysis I have seen, Kyryl is rated high because of his offensive performance.  His coach at IMG had this to say:

He brings a skill set where he has an advantage to other big men," IMG coach Vince Walden said. "He has the ability to step away from the basket, and he's also a guy who can put the ball on the floor."  "I think another strength is his passion for the game because he wants to get better and be a pro, so he has a tremendous amount of hunger and passion, which helps what he is trying to get done."

Kyryl should add a  huge body, literally and figurately, who can shoot inside and outside.  It seems as though his post play is outstanding and can hit the mid range and long ball.  Concerns over his rebounding could be foreshadowing of not so good things to come.  We were so spoiled with Jordan Hill grabbing every rebound, that when we have a 6'10" Center who may not get them all, we need to realize how lucky we had it with Jordan. Overall, I am very, very happy about the pickup.  This pickup a week before signing day may be a solid indication of good things to come in Tucson and could, strategically, give Miller an edge as he nears judgment day for new recruits: a top Center. Next up: Solomon Hill (get'em coach)

Good times ahead in Tucson.