Can Our Basketball Recruiting Be Saved By Floyd?

Share All sharing options for: Can Our Basketball Recruiting Be Saved By Floyd?

As we all know, the departure of Lute Olson has put our program's future on a downward spiral when it comes to recruiting.  We are most certainly going to lose Nic, Jordan, and Chase to the NBA.  Our two other starters for the year, Jamelle Horne and Kyle Fogg have tremendous potential but are not stand alone stars.  Brendon Lavender, Zane Johnson, Alex Jacobson, D.J. Shumpert, and Garland Judkins are our future. 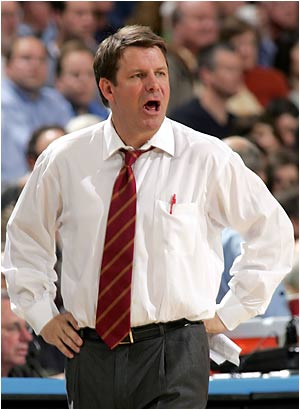 Tim Floyd has put together an impressive run at USC going 85-50 including a Sweet 16 appearance in 2007.   The Wildcats may be able to recapture Soloman Hill, who de-committed from Arizona and pledged his allegiances with the Trojans after Olson's departure.

Solomon said he would “weigh his options” if Floyd goes to Arizona.

Renaldo Sydney is another USC recruit who has been watching the events unfold in the past couple of days.  We could sure use this guy if Floyd comes over. Sydney said,

The one positive from the switch for Floyd is that he is coming to Arizona. Basketball country if you will. It's not like the guy is going to some smaller, lower level school. Arizona has tradition.  One thing is for sure, Arizona is going to need some help no matter what happens with our coaching move.  These two guys, plus the ability of Floyd to recruit in the Los Angeles and Southern California area would lead to a whole world of recruiting.  His relationships with high school coaches and his eyes and ears around SoCal could lead to grabbing some of those areas best players and bringing them to the desert.

Floyd should excel in the recruiting world associated with Arizona.  He has the great city, great facilities, top notch program, and lots and lots of T.V. appearances for those coming to play for him.  At USC, he could barely get anyone to come to the games, rarely selling out their 10,000 capacity stadium.  At Arizona, each game will be sold out and the players put on a pedestal.  USC? Basketball? I didn't even know they had a team until they beat my beloved hometown Longhorns in 2007.  Pete Carroll has dominated headlines and stolen the Trojans thunder for the past 5 years.  It's time for a change Floyd. Bring it to the Desert. Resurrect the Wildcats of old. Bring back Steve Kerr'esque magic to McKale. Play defense for a change. And last but not least: RECRUIT SOMEONE TO PLAY FOR US NEXT YEAR!!!!!