This is the second installment of a series of player-by-player look-backs at the 2008-2009 Wildcats basketball team. Click the links to see previous installments.

To the extent that the Wildcats had a "meal ticket" it was Jordan Hill. 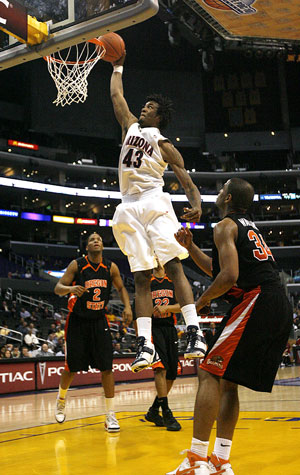 Key Stats. You can see Hill's comprehensive stats on DraftExpress. Hill's is a fascinating tale of a guy who came in raw--and still is kinda raw by NBA standards--but who added a little more to his game each season. Impressively, he managed to increase his pace-adjusted per 40 rebounding by a good bit from a fairly high baseline (11.1 his first two seasons to 12.7). He improved his free throw shooting from below 50% to the mid-60s as a junior . The one area where he showed significant decline is in true shooting percentage, where he dipped to 56% after shooting 64% and 62% his first two seasons. I suspect that the dip was primarily the result of him incorporating a (respectable) mid-range jump shot. His FTA/FGA number declined each season as he a) took more jumpers, and b) became a better free throw shooter. Even though I'm not crazy about the fact that he drifted away from the rim I understand it. First, Hill is a power forward--not a center. He can post up, but he can't do that exclusively. Second, defenses were more intentional about denying him the post. It's very easy in the college game to effectively deny post play. Third, Arizona a motion offense with a lot of screen-roll action. What I love about Hill though, is that when he's in the paint he's a power player. You never see him put up flippy, scoopy nonsense when he's in the paint. He's either going to ram it down, the defender is going to foul him, or both. Defensively, Hill isn't Hasheem Thabeet but he was steady throughout his career, averaging 3 combined steals and blocks each season (comparable to Blake Griffin). Unfortunately he's foul prone. (Like a lot of college big men he doesn't start to defend until his man already has the ball.) He managed to show some improvement in this area, but he still fouls a ton.

Overview. Though lightly recruited out of Atlanta (a real feather in Josh Postner's cap), he will take his place alongside Bison Dele, Loren Woods, Channing Frye, and Sean Rooks as the best big men of the Lute Olsen era. It's too easy to overlook a career like Hill's because he never advanced past the Sweet 16. However, he is a player with immense physical gifts who put in the work to develop them. He went to the gym and got better every year. How often does that happen, especially with big guys who often just cannot develop properly in the college game?

Looking Forward. What makes Hill an excellent NBA prospect is his athleticism and how that translates into production. Hill is a very good athlete but not a jaw-dropping one, along the lines of Chris Wilcox. With young bigs the best indicator of whether they can play is whether they block shots and rebound. (When big guys don't block shots and rebound it's a solid indicator that they're not NBA caliber.) Hill uses his athleticism and size to do things that are always useful. So the debate about how valuable a prospect he is not so much about whether he can play; it's about how much value GMs put on a "high floor" versus "perceived upside". Jordan Hill is not great in any one area. And since he's somewhat old for this draft class (21), it's a safe bet that he'll never develop into an all-NBA caliber player. That said, if he never improves outside of natural maturation he should at least be comparable to Anderson Varajao--but with a respectable 15-footer. Should he continue to improve with coaching, like with his footwork in the post, he should develop into a quality starting PF (or backup who plays a lot). His value in this draft, I think, lies in the fact that he's a fairly low-risk pick.