The Cats squeaked one out on Friday, rallying for five runs in the last two innings to come from behind and beat the Trojans 7-6 in front of 1,904 fans at Jerry Kindall Field.  Brad Glenn provided the winning single in the bottom of the ninth which scored the final two runs to seal the victory. 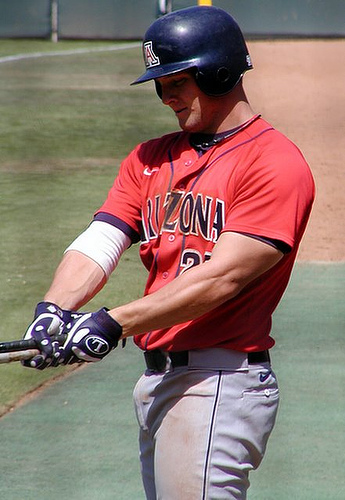 Preston Guilmet provided the Cats with a quality start going 6.1 innings, giving up 5 runs, 1 earned, on 8 hits and 3 walks. He also struck out 10 Trojans along the way.  I think it's safe to say that at the end of this year, the Arizona Wildcats are going to look back and  with they had taken more fungo at practice, instead of batting practice.  How many multi-error games have we had this season? If it's not one thing, it's the other. We can't get a quality start out of 4/5 of our pitching staff and when we do, we commit 3 errors and give up 4 unearned runs to keep the Trojans in the game. Cory Burns came in to pitch 2 outs and had a run scored on him as well, unearned. Jason Stoffel got the back door win after pitching a scoreless top of the ninth. That was his first win of the season.

Glenn had a solid day with 2 RBI's and Baird cashed in another great day going 1-3 with 2 RBI's and a run.  Shaun Cooper has cooled off a bit from his monster day last weekend, but I think the lineup is sufficiently worked its way to some normalcy.  Bryce Ortega has been great at the leadoff spot since moving there from the bottom of the order. Glenn, Baird, and Cooper round out the 3,4,5 hitters, which is fine with me. Steve Selsky has not seen much action in the last few games. There are plenty of guys waiting in the wings if anyone slumps, but for now, it looks like we know what's going on with our lineup. Now, if only we could get some pitching!