The Wildcats picked up their first commit for the 2010 season yesterday getting a verbal commit from long snapper Chase Gorham from Scottsdale Chaparral High School.  Chase was also recruited by Oregon and a number of other schools.  His grandfather and father both played for the Cats.  His father was a kicker for Arizona in 1973 and his grandfather was a defensive tackle in 1946. Rivals has Gorham listed as the #6 underclassman long snapper in the nation. 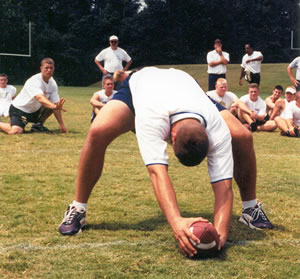 You know what they say: If you know your long snappers name, he's not doing his job. I hope I forget (in the best way possible) Gorham's name forever. Congrats to Stoops for his first commit. Let's hope we can keep it up.