Sean Miller has already made an impact on the players in the locker room. They all love him apparently. Miller is really trying hard to keep Nic Wise around for next year. Without him, we don't have a solid leader and only 1 junior college commitment for next year. Miller did warn that there were not that many recruits left out there and he is not interested in a quick fix. Sounds good in theory, but we'll see how the fans react next year during the season.

In case you hadn't heard, Josh Pastner was hired as Memphis' next coach. He received a 5 year, $4.4 Million dollar contract. Although I know that Sean Miller was probably the safer choice, I will always wonder whether Pastner should have received more attention and respect. He is only 31, but he was a genius when he was a player and was able to mirror a pretty good coach at Memphis. I hope he does well at Memphis. Maybe down the road, Arizona will be in a situation to snatch him up.

Arizona assistant coach Reggie Geary has not been waiting around for a new coach. That man has been on the road recruiting. Wow. That can't be easy. Hopefully he got to a couple of kids who could be impact players immediately and once they saw Miller come aboard, they may be seriously on the wagon!

Tim Kosch from the Daily Wildcat reports that William "Bug" Wright will be the guy who replaces Mike Thomas at wideout. Anyone with a nickname of "Bug" has got my vote. Check out this classic from Mark Stoops:

Arizona played their annual spring game on April 4, 2009. Nick Foles was 16-24 with 183 yards passing and 2 touchdown passes. He rushed for 0 yards on 4 carries. Meanwhile, Matt Scott was 11-20 with 1 interception. He threw 2 touchdowns, including a game winner on the last play of the game. Scott rushed for 27 yards on 9 carries. These stats lead me to believe that Arizona has quite a quarterback battle going on this spring.

(Foles had an incredible high school career at Westlake High School in Austin, although he did lose to my alma mater, Austin High. That boy can pass.) 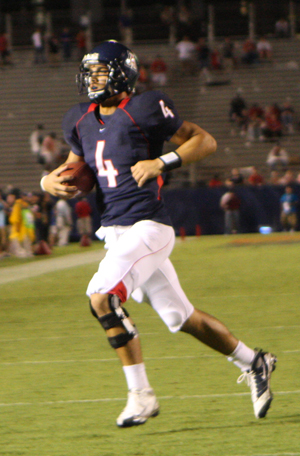 (Matt Scott has a few more wheels on him than Foles. Who to take?)

Arizona baseball takes on Oregon Stat tomorrow night at Jerry Kindall Field at 7:00 p.m. MST. Get out and support the baseball team. They need some pitching!!!

Arizona softball is 32-9 this season (4-2 in conference). The Wildcats will take on rival Arizona State on Friday and Saturday. Arizona State is ranked #5 and the Cats are ranked #10. This should be a good one. If you're around the campus, get out to a softball game and support the Lady Wildcats.