This is the third instalment of a series of season retrospectives on Wildcats men's basketball players. Click the respective links for previous installments on Jordan Hill and Chase Budinger.

Nic Wise is the third member of Arizona's "big three". Though less heralded nationally than Budinger and Hill, astute Wildcat fans know that Hill may have been the starting pitcher with the nasty fastball and slider, and Budinger the crafty setup man, but Wise was the closer. At the ends of games he had the ball in his hands more often than not, looking to drive, to dish, or to get to the FT line. 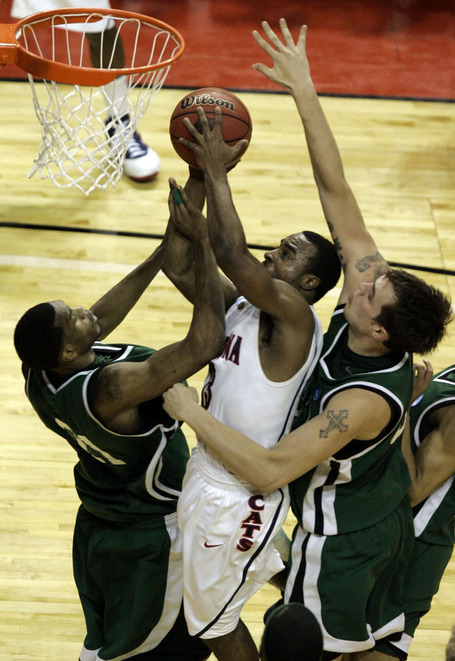 It will be interesting to see how Wise is remembered in the annals of Arizona guards from the Olsen era. A lot of his legacy will depend on the decision he makes this summer. Should he return, and make the kind of progress one might expect, I have little doubt that he will take his place on a long list of high quality PGs to play under Lute Olsen. Though it is unlikely he will have the Final Four hardware of some of his counterparts, Nic Wise has worked himself into an excellent ballplayer. (In fact, I'd say he's really about all Arizona has to show for its pipeline into Houston.) Should Wise stay in the draft -- a question I will return to -- I think we'll need some distance to see just how good his three seasons at Arizona really were.

Key Stats. Before jumping into Nic's statistical profile (courtesy of the excellent database at DraftExpress.com), it is worth mentioning that the example he set about managing ego and maturing really should be put into a training video. Wise, considered a prize recruit for promising young assistant Josh Postner, came in a little full of himself figuratively and literally. Built more for comfort than for speed, his freshman season became something of a joke. He averaged fewer than 10mpg, and looked close to collapse half the time. Sometime during or after that first season the light came on. Wise put down the fries and picked up the effort. He came back for his sophomore season in phenomenal shape, and more than tripled his minutes to 29.4mpg!

In most respects Wise is a typical college combo guard. He's a scorer. But what makes him atypical is that he doesn't dominate the ball. In fact, he's played off the ball a fair bit alongside Jeryd Bayless and Chase Budinger. So he's not useless without the ball in his hands. Wise's strength is that he is an efficient scorer; he's not just doing it on volume. This past season he averaged 15.7ppg on a very efficient 59% True Shooting% (TS% accounts for the effects of 3-pointers and free throws). Wise was often the #1 option in tight games late because he gets to the FT line. In the flow, he shot FTs on 39% of his FGAs. Overall he shot just under a quarter of the team's FTs (24.5%), and hit them at just under 85%. So you wanted the ball in his hands down the stretch. Wise also shoots a high percentage from the arc (41.5% in 08-09 and 48.1% in 07-08). On the downside, Nic doesn't give you a lot defensively or on the glass. He doesn't have the size to bother a lot of the guards he faces though he certainly has improved in his ability to stay in front of them.

Overview. The stats back up what I generally saw and felt when watching the Wildcats play. Nic can score but he's not a ball stopper. He tallied an assist on 33% of his possessions (highest on the team) while using up far fewer possessions than either Hill or Budinger. In other words, Nic is an efficient and productive scorer that seems to have a good feel for when to move the ball and when to score. That's a very difficult balancing act for combo guards.

Looking Forward. I have read nothing that indicates that Nic would be anything better than a late 2nd round pick or a free agent. I suspect the scouts will say to him something like, "You have to play the point in the NBA at your size. We know you can score. We want to see you really run a team full time, minus those other two guys." At the same time though, Nic's game is in many ways perfect for the glorified pickup games that pass for talent evaluation in the NBA. So if he works out well he could easily come out of nowhere and get drafted.

So here's the issue for Nic. Can he improve his draft chances more in the workouts or by coming back to school? I certainly hope he comes back to Arizona for selfish reasons, but Nic has to do what's best for Nic.