This is the fourth installment of a series of player-by-player look-backs at the 2008-2009 Wildcats basketball team. Click the links to see previous installments. 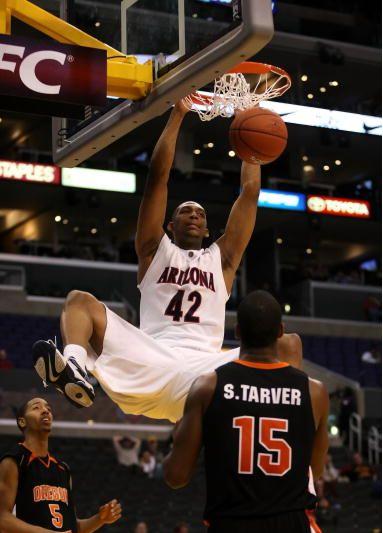 Horne played the most minutes of any Wildcat not named Budinger, Hill, or Wise this past season.

Key Stats. In just under 29 minutes per game Horne was something of an athletic "glue guy" for the team. Unfortunately, he had two outright end-of-game brain locks that cost Arizona chances to win. Despite obvious holes in his game, especially on offense, he managed to be a solid contributer. Statistically, Horne looks a bit better to the naked eye than he does on paper. His statistical profile (thanks to DraftExpress) over the first two years borders on dreadful. It was honestly much worse looking than I anticipated. His shooting is very poor (TS%: 48% as a frosh and 49% as a soph), owing mostly to the fact that he really doesn't have a well-developed game. He's not much of a three point threat. Nor is he a strong enough ball handler to be a slasher. Thus, he doesn't get to the FT line very often.

My big issue with Horne's offense is that despite his limitations he's a gunner. His FGAs/possession (95% as a frosh and 86% as a soph) are... umm... not modest. (Yes, you're reading that right. As a frosh Horne shot the ball on 95% of his possessions, and 86% this past season. And it's not like Horne is a post player. He's a jump shooting swingman.) I'd be a bit more charitable about his shot selection were he a better rebounder. Seven-plus pace-adjusted boards per40 isn't horrible for a swingman, but it's far from elite. For a guy with Horne's explosive athleticism and long arms he should be a better rebounder. The thing is, Horne's a high motor player. He just hasn't chosen to emphasize going to the glass.

Because I like Horne, I want to say "well, stats don't capture what he brings to the table," and there is some truth to that. (I'll return to that point.) However, he should be better in many statistical categories, like TS%, rebounding, and assists. About his only real positive statistical contribution is that he doesn't turn the ball over. Even that's sorta damning with faint praise. In Horne's case, he rarely tries to pass. So his turnovers are misleadingly low.

Overview. Having said all that, I still like Jamelle Horne. When I first saw him play I had visions of him developing into the next Richard Jefferson. He's really more like Washington's Quincy Pondexter. Both are long, athletic players that had to move to the wing to play at a high major program. Neither has developed ball skills, and consequently both struggle to play perimeter halfcourt offense. Horne's real value, like Pondexter's, is his defensive versatility. Horne doesn't block many shots or create steals but he's an excellent position defender--a VERY underrated skill that is difficult to capture with conventional stats. Because he can guard any SG or SF, along with many PGs and undersized PFs he gives a coaching staff a lot of options defensively. He's a useful guy to have around.

The big issue with Horne is that right now his offense is so dreadful that it's hard to believe his poor shooting alone doesn't offset virtually anything he produces defensively. Arizona's coaching turmoil has impacted his development perhaps more than any other player. He has obvious athleticism and skills, but he just hasn't developed offensively. Coach Pennell would have loved for Horne to step up and become the 4th starter, but his play never warranted it.

Looking Forward. My sincere hope is that Miller's staff can help develop him, but the prospects are not fantastic when you consider a couple factors. First, gone are any grandiose notions of him turning into Richard Jefferson. He doesn't have that kind of talent, and he will already be 21 in November. He's basically who he's going to be as a player right now in the sense that it's unlikely he's going to add new skills. He has to concentrate on improving the ones he has. Second, when you consider that Miller has recruited wing talent expected to contribute right away, odds are that Horne won't get the attention he needs to reach is potential. But, that's high profile college sports for you. Not nearly as much teaching goes on as one might hope.

Things don't have to end poorly for Horne, who can still develop into a very useful player while improving his draft prospects. It's just that now is the time to recognize what he is and what he isn't. He has two virtually identical seasons under his belt and they strongly suggest that he doesn't excel at any one area offensively, and that much of his value is on the defensive end. That's the player he is right now, and at 20 going on 21 it will be very difficult for him to reinvent himself. It might be wisest for him to concentrate on enhancing his skills. The surest route to the NBA for him is through defense and better rebounding. That's where Horne should start. He must also, however, continue to develop into a more efficient offensive player so that he's no such a liability in the halfcourt. That almost certainly will begin with shooting less.