Where in the world will Lance Stephenson end up?

Share All sharing options for: Where in the world will Lance Stephenson end up?

Yesterday was supposed to be the deadline for all recruits to select their school and the signing period officially ended without a commitment to any school from Lance Stephenson or Latavious Williams. Now speculation is flying as to where these two will end up and to be honest, the truth is very hard to weed out. Adam Zagoria of ZAGSBLOG.com has been on top of the story with several updates from several sources. Here are some of the notable updates he has given over the last two days: 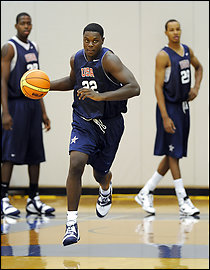 The news today is that Lance Stephenson Sr. told USA Today that his son had narrowed his choices to Arizona and Maryland. “He wants to clear his name before he makes a decision,” the father told the paper.

Latavious Williams says he could end up playing for Memphis and he hopes Lance Stephenson joins him there.

A source at Arizona said the Wildcats were trying to get Stephenson out for an official visit.

Another source told me the other day that Lance told one coach he would announce between Maryland and Memphis.