Share All sharing options for: Arizona Softball Advances to WCWS

For the 21st time in the last 22 years, the Arizona Wildcats have advanced to the Women's College World Series after advancing in dramatic fashion with back to back wins over Stanford on Friday. After losing game one, due to two costly errors, in the 3 game series in the super regional final on Thursday, Arizona responded with their back against the wall. The Wildcats are now one of only 8 teams that has a chance to be national champions. 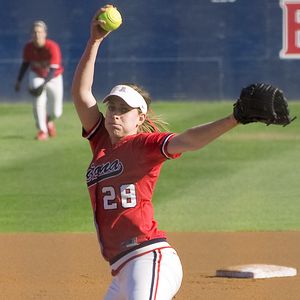 Stanford hopped out to an early 1-0 lead in the top of the first and held the one run lead until bottom of the third when K'Lee Arredondo blasted her 13th home run of the season to give the Cats a 3-1 lead. After the 4th inning Arizona held a 5-3 lead, but Stanford was threatening. Sarah Akamine came in to relieve Jennifer Martinez in the top of the 5th and shut down the Cardinal to give the Wildcats the win. She pitched 3 scoreless innings, striking out 5 of the 12 batters faced. 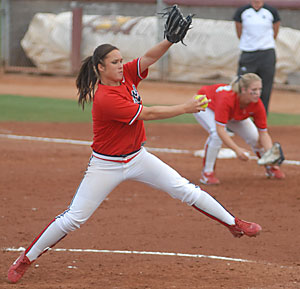 Sarah Akamine was strong in relief for UA in game 2

In the top of the first Arizona jumped out to an early 3-0 lead after Sam Banister's 16th home run of the year drove in 3 runs for the Cats. Sarah Akamine started the game for the Wildcats after her strong showing in game 2, but failed to get an out in her first 4 batters faced. With Stanford in position to take the lead down only one run, Lindsey Sisk came in for Akamine and did not disappoint. Sisk didn't give up a run until the bottom of the 6th, but at that point Arizona had drove in 6 runs and withstood Stanford's final surge. Sisk finished the game with 14 strikeouts as the Cats went on to win 6-5. 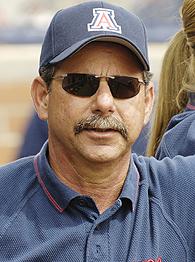 Mike Candrea will attempt to lead the Wildcats to their 3rd national championship in 4 years.