Speed. Period. That's his strength. Coach Dimel also  was impressed with what Cobb could do immediately at Arizona:

"Cobb can come in and immediately fill the need at the kickoff return position," said recruiting coach Dana Dimel, before leaving for Kansas State. "That is a position that is hard to coach because you are either a natural kickoff return guy or you are not.

"As good as Mike Thomas was at punt returns, he was not as good on kickoff returns. We tried Keola (Antolin) there and I am not so sure that is what his strength is either. It is definitely a voided position for (Arizona) right now and Travis can definitely step in and do that."

Cobb will bring a wideout to Arizona that can absolutely blaze. His 4.4 speed will immediately allow the Cats to stretch the field.  I bet Coach Nichol and Dykes can't wait to get a hold of this guy.  Cobb will be playing at the Z receiver position which involves more deep patterns.  Cobb also averaged 34 yards per kickoff return. Holla! 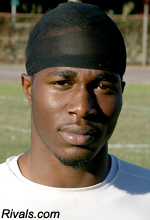 Only caught 36 catches for 508 yards for Blinn Junior College in Texas last year.  Unfortunately, 5 catches and 162 yards + 3 touchdowns came in 1 game. That means the majority of his TD's came in one game last year. Without actually getting recruited out of high school, and those receiving stats from juco, I think its safe to say that Cobb is going to be a special teamer first, receiver second.  Cobb will also be backing up Delashaun Dean and Devin Veal. Dean had 53 catches for 593 yards and 4 touchdowns last year.

Expect Cobb to be an immediate impact for the Cats on the special teams side.  His upside for a backup who can stretch the field is sexy, but not all that practical right now. He comes to Arizona as a junior transfer who will back up a  solid Z receiver in Dean and a special backup in Veal.   Dean had 4 catches for 130 yards and a TD in the spring game while Veal had 2 catches for 23 yards. Cobb will be behind as soon as he steps on campus and will have a huge uphill battle to compete on the offensive side. 34 yards per kickoff return? Yes please.