Share All sharing options for: Kevin Parrom Commits to Arizona

The class of 2009 for the University of Arizona finished with a third four star recruit for Sean Miller. After narrowing his list to just Arizona and Pittsburgh, Parrom chose Arizona after being impressed on his weekend visit.

"I didn’t know they love basketball that much here," Parrom said by telephone upon boarding a flight home. "It’s just a great place to be. The academic advisors are great. … and I’m looking to grow in the Pac-10."

After what looked like it was to be a bad class, the recruit class of 2009 for Arizona basketball became a rather impressive one with the addition of Parrom. 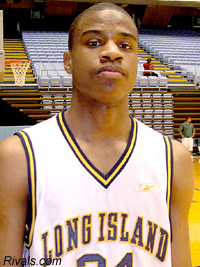