A scandal at USC over alleged recruiting violations during the recruitment of O.J. Mayo eventually forced Tim Floyd to step down from his position as head coach of the basketball team. With the loss of this figurehead of the Trojan's program, a couple of their basketball recruits filed for a release from the university to reopen their recruiting. Among these players is point guard Lamont "Momo" Jones. Sources close to Jones have said that Florida, Memphis and Arizona are his three most likely landing spots. 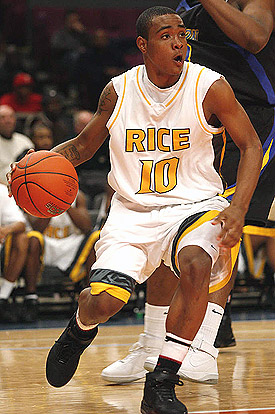 Cut from the Chris Lofton mold of undersized two guard. Has 3-point range and the guts to take the big shot. (Scout.com)

Jones places a great deal of pressure on defenses through his score-first mentality as a point guard. As soon as he gets the ball, he looks to put points on the board. Jones has good quickness, a thick body similar to current North Carolina point guard Ty Lawson, and decent ball-handling skills, though similar to many modern-day lead guards. Jones has decent vision and easily locates open teammates for easy shots when he tries to accomplish this task. (ESPN.com)

Needs to work on diversifying his offense and expanding his ball handling abilities. (Scout.com)

Jones has a tendency to palm the ball and carry almost every time he dribbles. He has to stop over-penetrating and creating trouble for himself and turnovers by dribbling into crowds. However, he will have to improve his shot selection and alleviate his tendency to fall in love with the 3-point shot. Jones could become a solid point guard if he learns to change speeds and gets under control in addition to enhancing his decision-making and learning to look for teammates more often. (ESPN.com)

One interesting thing to note about Jones is that he is from New York like Kevin Parrom and Lance Stephenson, and in fact played with Stephenson on the Juice All-Stars. If Lamont Jones were to commit to Arizona, it would be an additional perk to the possible persuasion for Lance Stephenson to come to U of A. Rumors are flying around the internet that Jones has already decided that Arizona will be his school of choice although nothing official has been announced. Lamont was considering Arizona as a possibility prior to committing to USC, but the Trojans threatened to rescind their offer if he had an official visit with the Wildcats. It appears the Cats are in good position to add to their small recruiting class.