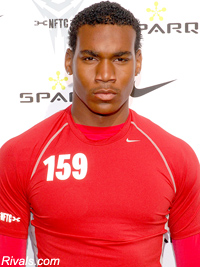 6'4". 220 lbs and runs a 4.7? I'll call that a strength. Miller was a wide receiver in high school but will move to TE for the Cats. Miller is a big guy who can run vertical routes and use his body to create space between him and his defender. Scouts, Inc. has the following to say about Miller:

Adjusts well to the difficult throw. Shows good body control, concentration and athleticism. Utilizing his long body and wingspan extending for the grab. Mismatch on the jump ball.

Miller is not a proven blocker, as he did play wide receiver in high school.  His size at 220 puts him at a serious disadvantage (Jack Baucus and Rob Gronkowski) on the line going up against bigger, stronger defensive linemen.  Coverage against a tight end versus a wide receiver is a little different, but nothing Miller shouldn't be able to handle. Here is what Scouts, Inc. had to say about Miller:

Not a real sharp route runner but can separate on drag and dig routes and covers a lot of ground with his long stride. Shows some strength after the catch breaking initial tackles but lacks good breakaway speed. Could struggle separating as a route runner as well if employed at receiver. As a true tight end or H, he would need to add good bulk and strength to improve his blocking skills; does show he can stalk-block well downfield.

Look for Miller to be in the same boat as Baucus this year. Sitting in the wings, waiting, and hopefully learning from Rob Gronkowski.  His athletic abilities are what makes him special.  He could gain another 15-30 lbs and stay at tight end or he could work on his speed and move back to his old high school position.  Unfortunately for Miller, his playing time for this year is going to be limited or non-existent. Some playing time on special teams is not out of the question considering his 4.7 speed and size to blow people up.