Before we dive into Cordarius Golston, I want to direct everyone's attention back to OL Jake Baratz. I posted a picture of him earlier this year on his recruiting spotlight and it was not him. Thanks for the heads up Mr. Baratz! Another picture is up of Jake and he looks like a monster. Good luck next year!

Rivals: Three out of Five stars 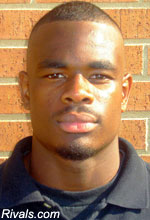 Golston was a second team All-District 15-4A selection as a sophomore and was a first team all-district selection as a junior after a 100-tackle, five-sack season.  Golston has a huge upside to him with his 4.5 speed and gap filling ability.  Scouts think that he can really plug holes and be a true inside out kind of backer.  The Arizona Athletics site says that Golston could start summer camp palying on the outside backer instead of the middle.   At 6'1", Golston has the ability to pack on more muscle onto his frame.  He is currently 195 lbs. and needs to beef up to take on D-1 tackles. Here is what Scouts, Inc has to say about Golston:

Golston lacks great size and speed measurables on paper, but he is productive and plays with a lot of energy between the white lines. Actually looks a bit bigger on film than listed size and has room on his well-built frame for added bulk. At his best playing downhill and supporting the run between the tackles. Stays square to the line of scrimmage when filling.

As was the case with Jake Fischer, Golston has the ability to plug the inside, but is going to have some trouble playing sideilne to sideline.  This analysis should be taken with a grain of salt.  The guy has 4.5 speed. If he comes to campus and is able to learn the scheme, the coaches will have him reacting properly and he'll get to the sideline.  Here are some other things Scouts, Inc has to say about Golston:

However, he lacks great sideline-to-sideline range and overall speed for a sub-200 pound 'backer. Hip-fluidity in space is marginal. Tends to lose some in transition opening and turning to run. Lacks good change-of-direction quickness and could struggle to mirror quicker zone runners between the tackles.

Cordarius Golston is currently listed at the Will linebacker on the Arizona Depth Chart along with Jake Fischer.  Surprise, surprise.  Their writeups were almost exactly the same: "great inside plugging ability. Lack of sideline to sideline play."  I think that Golston will be a solid linebacker no matter where they line him up.  If we begin to struggle in the middle, he should slide over and start learning that spot.  Let's hope that with his speed, Golston gets some time on special teams this year for real time experience.