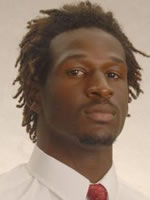 Marcus Benjamin is a mid-season enrollee who is from Arizona Western Community College. He originally verbally committed to LSU in 2005 but never enrolled. In J.C. he had 8 interceptions in 2008, not to mention his freshman campaign where he had 67 tackles and two interceptions.  Benjamin's jump from 2 interceptions to 8 shows his comfort level in the secondary and his ability to close and make the pick.  Benjamin completed spring drills with the team and should be competing for the starting cornerback position along with sophomore Trevin Wade.  Trevin missed the spring game with the flu and Marcus had one tackle in the game.

Not much to report on Benjamin as he has stats from J.C., but hasn't played with the big boys for quite some time.  He was able to enroll at Arizona for the spring semester which should put him on par with competing with Trevin Wade in the fall for the starting cornerback position.

Entering into the fall, you've got two guys who are going to be battling for the starting job.  This is going to be one of the most highly contested position battles on either side of the ball.  Trevin Wade had 4 interceptions last year for the Cats and did an admirable job in a reserve role.  Marcus Benjamin has been playing for two years in J.C. and his numbers are impressive.  His ability to enroll early and participate in the spring game and drills is a huge key.  I can't think of a better position to be deep at considering the spread offenses that are emerging in college football now days.  We'll be following this battle in the late summer for sure.