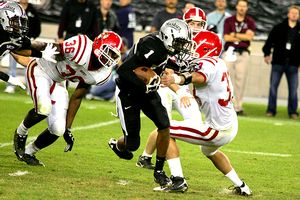 Speed. Speed. Speed.  Ryan ran the 100M in 10.33 seconds at the 5A-I Arizona State Championship and has run it in 10.31 as a personal best.  The guy can flat out fly.   He had 5 interceptions his junior year and a 96 yard kickoff return for a TD his senior year.  He followed up his junior campaign with three interceptions and four blocked kicks in 2009.   Milus' high school also won the Class 5A Division I Arizona state championship last  year.   It also doesn't hurt that his dad was the secondary coach for the St. Louis Rams and has had 9 years of NFL coaching experirence. Here is what Scouts, Inc. had to say about him

Shows a fluid pedal, hips and turns. Has the hips and foot-quickness to cover receivers tightly off the line and limit separation. Stems well over the top. Soundly anticipates the throw and transitions very quickly out of his pedal breaking on the ball in front of him. Steps up fast on perimeter run support as well. Shows good body control and hip adjustment to the deep throw. Utilizes above average leaping and ball skills to mask his marginal size on the jump ball. Displays good man-to-man technique riding the hip and utilizing his playside hand.

Overall, Milus is consistent and a well-rounded corner who will be able to play a number of different coverages and matchup with most college receivers from a speed standpoint. 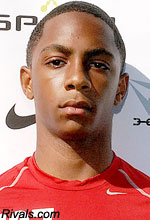 160lbs? Really? Obviously size is going to be problem for Ryan at the next level.  when you are going up against receivers who can be pushing 220 lbs, he's going to be manhandled on run defense.  Here is what Scouts,  Inc. had to say about Milus on his weaknesses:

he lacks great play speed at times and burst out of his cuts when trying to mirror receivers or recover. Not real explosive. Our main concern is his marginal size when asked to press and battle for positioning versus today's bigger D-I receivers. Leaves his feet a lot as a tackler and will struggle setting the edge versus the run. is success will most likely be dictated by his continued physical development.

Milus is going to have a hell of a time starting this year with Arizona's secondary coming back.  He also needs to put on some weight and keep his speed at the same time in order to play at the next level.  Milus is one speedy devil, uh hum, Wildcat, who could participate immediately on special teams rushing from the outside and returning kickoffs.  He will have great guys ahead of him like Devin Ross, Mike Turner, Trevin Wade, and Marcus Benjamin to learn from.  Look for Milus to get a few reps this year while he is eating Los Betos nightly.