Rivals: Three out of five stars. 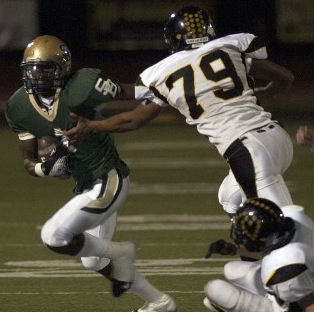 STRENGTHS:
Jackson Powell is no stranger to college football. Both his father and brother once played at USC. But Powell decided to take another route and become a Wildcat. He's also smart, boasting a 3.0 core GPA and blasted the SAT with a 1500.   Powell racked up accolades in Southern California including earning first-team All-CIF Divisional honors, All-area honors from the Los Angeles Daily News for the second straight season and was also an All-Ventura County pick for coach Gary FabriciusWhile. Powell was the 24th ranked weakside defensive end in the 2009 class, and was recruited by schools like Cal, Washington, and Oregon State.
According to Scouts, Inc.

He is a tall kid with a good frame. He will need to keep filling out, but looks a little thicker than what he is listed at. Needs to be a little more consistent, but displays a nice get-off. Does a good job of getting to the shoulder of a blocker and getting into the gap. Will squeeze down on blocks. Displays the ability to come across the ball and get flat and down the line. Displays adequate straight line speed. Not a kid that will run down plays from the backside on speed alone, but gives effort and takes good angles. Flashes the ability to be tough when run at. 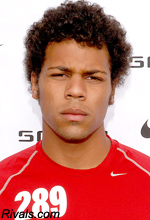 Powell has lots of good attributes, as listed above, however; it's a consensus that he may need some time in the weight room in order to compete at the next level.  Powell will be playing behind returning starter Ricky Elmore and D'Aundre Reed.  He'll need to bulk up that 215 lb. frame in order to be an effective run stopper on the end.  Here is what Scouts, Inc. had to say about his downside:

Displays the ability to shoot his hands and control the blocker and hold his ground, but needs to be much more consistent in this area. Needs to be more active with his hands to separate from blockers and really needs to watch his pad level. He is a tall kid that will tend to quickly pop up. Displays adequate short-area change-of-direction skills. He is a solid tackler who will wrap up high. Flashes good tools as a pass rusher. Will be more active with his weapons, but needs to be more consistent. Displays a good ability to punch and get his hips flipped and work past a blocker. He is adequate as a bull rusher because of his pad level and can get stuck if he does not initially beat his man.

Look for Powell to get some reps at DE this season as we have a solid core returning from last year.  Powell was one of three defensive ends recruited by the Cats, including Taime Tutogi and Justin Washington, but Powell is the only one listed on the depth chart as being a defensive end.  Tutogi is listed on offense under HB and Justin Washington is listed as nose tackle.  This puts the Cats in dire need of a strong DE to step up this year, get some experience, and be able to step in next year in case of injury or early departure by some of our current studs.