To round out Arizona's 2009 basketball recruiting class, La Mirada High School power forward, Derrick Williams, a 3-star rated recruit by Rivals.com, will join Sean Miller in his first season as head coach of the Wildcats along with four other top rated recruits. A former USC recruit, who was let out of his letter of intent, Williams chose Arizona over Memphis so he could stay West - increasing the total number of USC defections to Arizona at three (Solomon Hill and Lamont Jones as the other two). 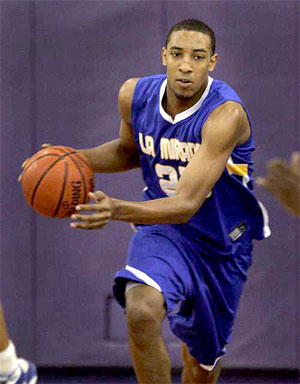 Although he was not among the top 150 players rated in this 2009 class according to Rivals but a top 100 recruit by Scout.com, Derrick Williams, a 6-8", 215-pound Power Forward, is a welcome addition to Arizona's team. With Jordan Hill having left for the NBA, power forward was a position that was most depleted entering the off-season. With Jamelle Horne as the only player penciled in to play the four, Williams will provide some much needed depth along with some scoring and rebounding. As a senior at La Mirada High School, Williams averaged 25 points to go with over 10 rebounds a game and led his team in steals and blocks.

From wildaboutazcats.com, here's a look at how the 2009 roster is shaping up: 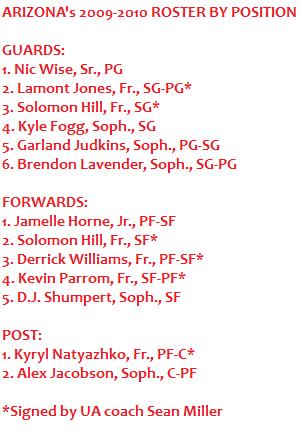