’s strongest group of the year will be the returning experience on the D-Line. Ricky Elmore, Earl Mitchell, Donald Horton, Brooks Reed, D’Aundre Reed, Dominique Austin, Lolomana Mikaele, and  Apaiata Tuihalamalaka  all got time last year.  These guys are big, fast, and experienced.  Arizona should be healthy and deep when the season starts in 2009.  Their depth will allow them to rotate guys in and keep the pressure up all game long. 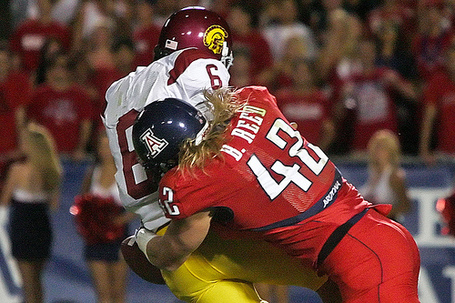 The Cats are going to need their experience up front to help out their secondary, who could be looking at playing two inexperienced guys to start the season.  Heavy pressure always relieves the guys in the secondary from having to be great.  With a league like the Pac-10, and so many great quarterbacks, its essential to have guys like Brooks Reed (8 sacks), Ricky Elmore (4 sacks) and Earl Mitchell (1.5 sacks) coming back.   The Cats will start Reed and Elmore on the outside with Horton and Mitchell inside.  Talk about a solid front four.

The Cats obviously recruited weak in the D-Line department for 2009 based on their overwhelming number of returning underclassmen.  The Cats did get a great transfer in Jonathan Hollins who is 6’3" and 280 lbs.  He will be pushing our already great starters for playing time.  The Cats picked up Sione Tuihalamaka as well.  His brother, Apiata and his cousin, Vuna already play for the Cats, so he is stepping in his family tradition of playing in .  Look for Hollins to rotate in early and often.  He has juco experience and is massive. 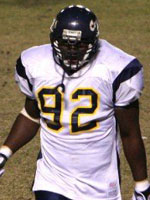 (Hollins should get some playing time this year)