High School: Transfer from College of the Desert

Jack Julsing is another Juco transfer who should see immediate playing time on Arizona's offensive line.  He is slated to start at left tackle.  Julsing has been at Arizona since January and this has enabled him to pick up the offense quicker than a September enrolee.  Julsing jumped Phillip Garcia on the depth chart this spring with his huge run blocking abilities.  Left tackle will be the most important offensive linemen in passing protection as he will cover the blind side for either Foles or Scott. 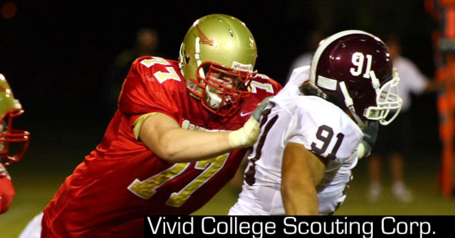 The only weakness Julsing has is his height.  He stands 6'8" tall which makes it difficult for quarterbacks to get a clear line of sight on short routes to the left.  He also has difficulty getting leverage on smaller defensive ends and defensive linemen.  I wouldn't be too concerned with these "weaknesses" and hope Julsing can stay healthy this season.

Julsing and the other offensive linemen are broken down in our Wildcat Position by Position Breakdown: Offensive Line.  Julsing should step right in and be a factor in how much protection Scott or Foles receives on passing plays and should be a monster on run blocking.  Be excited wildcat fans. Our O-line should be good this year.