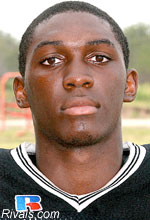 This kid has got it all. He has a strong arm, great poise, good leadership, and can run like the wind.  Morrison is ahead of the game when it comes to Foles, Scott, and Beirne because he ran the spread in high school and should have no problem in transitioning into college to make his reads.  There is a reason that Sonny Dykes recruited this kid and we should be glad that our offensive coordinator went to Texas and snagged him up.  He threw for 2,472 yards his senior season including 22 touchdowns and 8 interceptions.  He also ran for 586 yards on 110 attempts, averaging 5.3 yards per carry.  Here is what Scouts, Inc. had to say about him:

Morrison is reminiscent of a right-handed Pat White. Lanky, lean and still yet to grow into his frame, but possesses excellent overall athleticism and running ability with a live, quick delivery in the passing game. Is truly a spread offense guy that is best out of the shotgun. He is very quick and shows good pocket awareness and presence to move around and buy time. However, he is a passer first when his number is called. Gets set quickly, does a very good job of seeing the field, working reads and keeping his eyes up even when he is rushed. In other words, he doesn't just tuck and run when things break down. Has a quick release and can beat the rush with his arm. Shows spicy zip on underneath throws, shows good accuracy and has nice touch on the deep ball. Has the elusiveness and quickness to make people miss in the open field and is a real threat on the perimeter when rolling to either side. 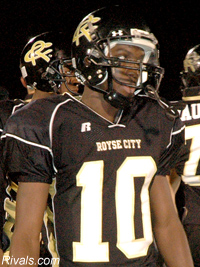 Morrison is only 6 feet tall and weighs 180 lbs.  He will need significant reps with his college level offensive linemen in order to adapt to seeing over their huge frames.  He will also need to beef up a little bit in order to handle the hits that will surely be delivered at some point in his career. Here is what Scouts, Inc. had to say about Morrison's weaknesses:

Needs to develop discipline and patience at times in the passing game and would love to see him add experience from under center. Has adequate height, but not ideal.

Morrison has tons of talent and experience in front of him at Arizona with Matt Scott, Nick Foles, and Bryson Beirne.  He should get good experience in practice this year and will be a key recruit in Arizona's future at QB, but definitely not in 2009.  Look for him to redshirt this season and not leave coach Dykes' side during the games in order to get all the game situation experience he can.