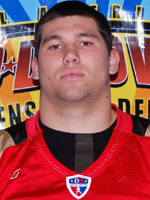 Power.  Erno hits hard at the point of attack.  He does not have to gain a ton of weight, as he already weighs 230 lbs.  This will enable him to deal with the rigors of college football, compared to the high school level.  Erno is a self-described "hard nosed" player who loves to hit.  Here is what ESPN/Scouts, Inc. had to say about Erno's strengths:

Erno definitely passes the eyeball test at his middle linebacker position and is very productive cleaning up between the tackles. He is tall, thick and well-proportioned. Plays with a wide, solid base at the point of attack and shows good power through his hips and lower-body. Fills hard and quickly downhill with square shoulder pads; rarely gets turned out of his run gap and forces blockers and ball carriers upright on contact. This kid will blow up the fullback iso and excels against two-back power-running schemes. Shows good short-range speed and sharp lateral pursuit angles in traffic. Closes fast on his final steps before contact and is a strong tackler. Not overly reactive but takes very few false steps and can deceptively redirect. Gets to his drop quickly while reading the quarterback and underneath routes. Hips, turns and overall fluidity in coverage will surprise you for a thicker linebacker, and he will close hard and quickly on the pass.

Erno's speed will not remind anyone of Lance Briggs, or Ronnie Palmer for that matter.  What he has in size and strength, he lacks in top-flight sideline-to-sideline speed.  This may limit his playing time in the nickel and dime packages until his speed and quickness improve.  Here is what ESPN/Scouts, Inc. had to say about Erno's weaknesses:

Our main concern when projecting for the next level is his lack of sideline-to-sideline speed and range. Good football speed but could struggle against offenses that spread the field and create matchups in space. Excels when he has a clear read to the ball carrier but can struggle sifting through the wash and slipping the cutoff block when linemen reach him. Hand and shedding technique for a linebacker with his measurables is not as strong and polished as you would like.

Before Adam Hall's signing, Erno was the cream of Arizona's recruiting crop this season.  His size and physicality should give him the opportunity to compete for playing time this fall.  His ability to stuff the run and create high-impact collisions could endear him to Arizona fans.  Expect him to be more of a factor against non-spread teams, such as Cal, Stanford, UCLA, USC, and Washington.