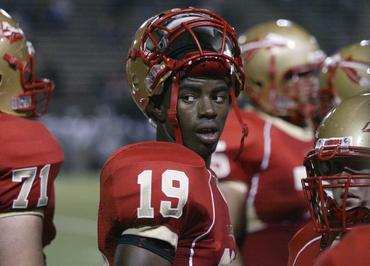 DeWayne caught 52 passes for 687 yards  in 2008. Arizona has some guys who possess great speed but Peace is not one of them.  Consider his 4.53 a marginal speed in the Arizona depth chart.  His 4.53 speed isn't going to be lights out, but his combination of excellent hands and speed will create nightmares for DB's in the future.  Hopefully, he will be used as a possession receiver during his days at Arizona.  His recruiting write ups show that he has a great ability to find the soft spot in zones and hunker down.  His ability to read zones and always make the catch with his excellent hands is a huge asset. He was recruited directly by Sonny Dykes which is saying a lot considering Dykes only gets guys he thinks could excel in his offense.  The Cats are loaded at WR and Peace was only 1 of 2 recruits rounding out the 2009 class. Here is what Scouts, Inc. had to say about him:

Peace is one of those guys that doesn't necessarily "wow" you in any one particular area, but what does stand out is his production, toughness, great hands and sneaky ability to get open despite just marginal speed. He is quite crafty in his methods and quicker than fast as a route runner and runner after the catch. Drives off the ball with good surge and gets into routes quickly. Runs low and shows smooth feet and hips to get into and out of breaks with out gearing down too much. Shows sneaky burst off the cut to generate separation in the short and intermediate passing game. He is a guy that at the next level may be better suited in the slot where he can work against underneath zone, settle into soft spots and use his toughness and hands to come down with big grabs. Hands are soft and reliable and he will flash the ability to make the acrobatic catch. Shows good focus over the middle and can adjust to the over the shoulder ball. Shows nice body control too. 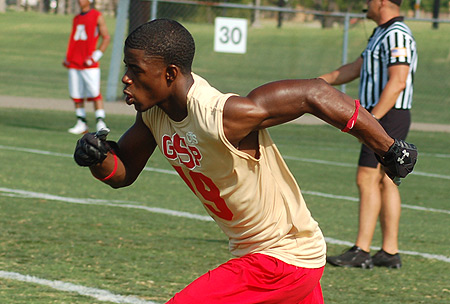 Peace's size and speed are going to be his downfalls. Guys who are 5'11" usually possess a little more speed and quickness than Peace does.   Also working against Peace is the unbelievable amount of competition and lettermen ahead of him with game experience.  Peace is on the roster currently as a backup to Terrell Turner and  Juron Criner at the X receiver.  Turner is 6'2" and Criner is 6'4" while Peace stands at only 5'11".  There is a good chance Peace will move to the slot receiver during his tenure at U of A. There is also a good chance that he will redshirt. Peace will hard pressed to get much playing time this year due to his size, marginal speed, and depth chart problems.  Here is what Scouts, Inc. had to say about Peace:

He has good height, but a lean frame that must develop some upper body strength. Shows an ability to get deep at this level, but may have trouble doing the same on the next level.  However, Peace just lacks great speed. Isn't a guy that is going to be much of a threat to go the distance after the catch-- more of a possession guy without the ideal size. If he was a blazer, everyone would be after him because he does all the little things well because he has to in order to win. Overall, Peace is steady and productive but may have a few limitations at the next level.

Because of Peace's inability to burn down the sidelines, he will be used more as a possession receiver sans the height.  Scouts, Inc. makes a good argument that he may be better suited for a slot receiver so that he can get into the zones quicker and find the soft spot.  Most passes to the outside are made by QB's with guns who are running timing routes with their outer receivers.  Their inside guys are used for longer, maturing routes such as curls, ins, and 5-10 yard outs.  It always helps a QB who is in the pocket and is in trouble to have a guy who is smart enough to be able to sit in the zone and help him out.  This is what I forsee Peace doing for the Cats and believe that his speed will limit him in his ability to play the outside receiver.