Share All sharing options for: Arizona vs. Central Michigan Preview

Central Michigan comes to Tucson on Saturday looking to get a big win against up and coming Arizona.  The Chippewas return 7 offensive starters, including QB Dan Lefevour, and 10 defensive starters.   Lefevour is a talented QB who can easily burn you in the air or on the ground with his great speed.  The Chippewa rushing attack features a couple of rushers who can take the place of departing Ontario Snead and Justin Hoskins.  They include Paris Cotton, Bryan Shroeder.  Paris is the guy who can turn on the after-burners and Bryan is more of the power back.  They will need to step it up this season to help protect their star QB in his play action schemes.

The Chippewas will have a plethora of receivers to go with their star QB.  The Chippewas return Antonio Brown and Bryan Anderson.  Anderson has gone 40 consecutive games with a reception, the longest active streak in the country.  The Chippewas also will feature Jahleel Addae and Kito Poblah, who round out the receivers.  There are plenty of guys who are fighting to get into the game and compete and word is they are deep at receiver. 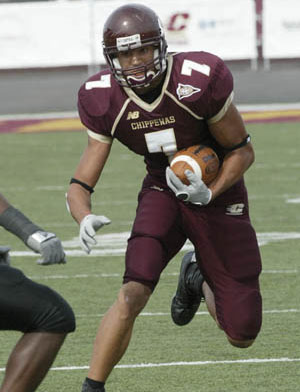 The Chippewa defense ranked 14th nationally last year in sack totals.  The defense returns 10 starters from last season including beasts Sam Williams and Frank Zombo.  Those guys combined for 15.5 sacks in 2008 and can put the pressure on any QB in the country.   Zombo will move to DT this season from DE and should be able to plug the middle with his athleticism and quickness off the ball.  Unfortunately for the Chippewa's, Zombo's move to the middle is more because of a lack of depth on the interior, and not because they have enough to move him there to help get more good players on the field. 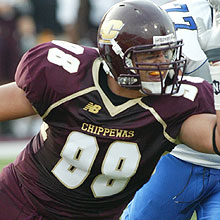 (Zombo is a BEAST)

The Chippewa Linebackers return all three guys from last year.  They are Nick Bellore, who has made over 100 tackles in 2 seasons of play and has started all 27 games since his debut as a freshman. Matt Berning will play in the middle linebacker spot while Tim Brazzell, the only senior of the three and will provide the defense with the leadership this season.

Now, to the defensive backs.  Wow. These guys had a rough season last year. They ranked 118 out of 120 in all FBS teams last year.  No matter what kind of points Lefevour could put up, the defensive would give it right back.  That's tough on an offense who can't seem to play catch up all day long.  From the looks of the team, there seems to be tons of guys vying for playing time in the secondary for Central Michigan.  Unfortunately, the Chippewas have quantity and not quality in the secondary.