With the Wildcat's first game of the 2009-10 campaign exactly 2 months from today, Sean Miller is scouring the nation for young players to play for him in 2010. He has yet to receive his first commit for this class, but Rod Odom could be the first after an official visit that left him "really impressed". 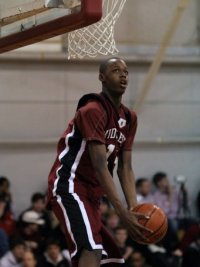 Odom has a very high basketball I.Q. and plays the game above the shoulders very effectively. He passes the ball very well and has a decent jumper.  He's got all the signs of a future high-major player as he's a 6'8 wing who makes shots, sees the floor and passes well, and can handle against pressure. He has a good feel for the game and a good sense of what to do both with and without the basketball. (ESPN.com)

He has to continue to add strength and muscle to his very thin frame, as he has tendency to allow defenders to get into his chest and knock him off his path when he tries to go to the bucket. He also has to continue to uses his basketball smarts to overcome his lack of explosion and quickness, though he could work on his ball-handling skills and moves to become more efficient off the dribble. He doesn't dominante a game like a future high-major player should. The biggest question mark for the next level is what position can he defend. He doesn't have the physical strength to bang on the block and also lacks the lateral quickness to be able to guard more explosive wing players at the moment, although it remains to be seen if that will change as he grows into his body. Similarly, he doesn't create his own shot on demand against high level defenders. (ESPN.com)

WILDABOUTAZCATS.com: After watching what Miller showed you, how do you feel you would fit in to his system?
ODOM: I would fit in pretty good. I play mostly on the wing. I can also see me myself at the No. 2 (shooting guard) position in college. Coach Miller showed me that I can play a lot of ways in his system, but I see myself mostly as a No. 3 (wing) or No. 2.

WILDABOUTAZCATS.com: How do you see yourself fitting in chemistry-wise?
ODOM: They’re all good guys over there. I spent most of my time with Kevin and MoMo. They let me kind of see what the whole program was all about and they told me how much they liked it there.

WILDABOUTAZCATS.com: How is this whole process going? You’re getting tons of calls and a lot of attention placed on you. Is it too much some times?
ODOM: No, to be honest with you, I feel very blessed. A lot of kids who put in as much work as I do, are not as fortunate in terms of getting recruited. So if I ever think that this is overbearing, I just think about those other guys. I feel like I’m blessed to be in this position.

WILDABOUTAZCATS.com: Academics is important to you and your family, especially with you looking at schools such as Vanderbilt, Harvard and Boston College. How does Arizona figure into that for you?
ODOM: Arizona did a good job of showing me and my parents what they have to offer academically. They showed me their honors program and basically pointed out that I can benefit from a degree at Arizona as much as anywhere else. They gave me a tour of their entire campus, which I liked. (Note: Odom said he currently is undecided on a major).

WILDABOUTAZCATS.com Was it a culture shock for you in Tucson being from the east coast? Too hot for you?
ODOM: I’ve never been there before, but no, as a matter of fact, the weather was nice when I was there. I don’t think that is a big deal. I’ve known Kevin and MoMo for a while now and they love it out there. I got to see what they are talking about.

WILDABOUTAZCATS.com When do you plan on making a decision?
ODOM: Definitely soon, during the fall period.

Harvard: Odom will be taking an official visit to Harvard on the 26th. Not a traditional basketball powerhouse by any means, Harvard's academics are the obvious appeal to Rod. He was quoted saying, "Education is very important to me and my family so that's why I am considering Harvard. I wont be playing basketball forever." After an education at Middlesex School, Harvard seems like a distinct possibility for Odom.

Boston College: The Golden Eagles are a hometown favorite for Odom. Odom told PointGuardU.com, "Boston College has been recruiting me for a long time and they're close to home. They have a lot of upperclassmen so they'll have playing time."