Appearing in a bowl game last season, for the first time in a decade, whet the appetite of Arizona fans, and players.  More is expected.  This team has the depth and athletes to compete with anyone in the Pac-10, it just lacks that prototypical star player who changes the game every week.  Head Coach Mike Stoops received his long-awaited contract extension this off-season.  The hot-seat will remain cool for Coach Stoops as long as the team continues to improve.

When Arizona has the ball:

The offense returns four starters from last year's opening game, but seven players who started a significant portion of the season last year.  The team lost QB Willie Tuitama, WR Mike Thomas, OT Eben Britton, OT James Tretheway, and OG Joe Longacre.  The team returns its top two rushers from 2008, in Nic Grigsby and Keola Antolin.  Although Sonny Dykes' Air Zona offense is known for spreading the field and throwing the ball, Arizona's rushing attack will be one of the biggest keys to a successful 2009 campaign.

Running Game:  Arizona's two leading rushers (Grigsby and Antolin) are back, with the addition of bruising Greg Nwoko.  The trio has already earned the nickname Earth, Wind and Fire from their Arizona defensive counter-parts.  With Grigsby and Antolin, 1,678 yards and 23 touchdowns returns to a stacked backfield.  The coaching staff has raved about Nwoko, who should provide the power-punch in short yardage situations that Grigsby and Antolin lack.  The offensive line lost NFL draftee Eben Britton, as well as stalwarts James Tretheway and Joe Longacre.  Despite the losses, experience does return:  Mike Diaz (9 starts) has switched to left tackle; Colin Baxter (24 starts) took over at center when Blake Kerley went down early last year at UCLA; and right tackle Adam Grant (5 starts) is the grizzled veteran of the group, who is ready to breakout after an injury plagued career thus far.  Overall, the line may have lost an elite tackle in Eben Britton, but it returns experience and versatility. 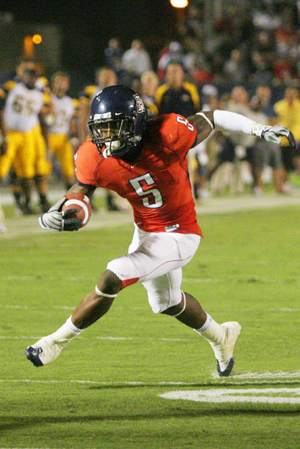 Passing Game:  Record-breaking quarterback Willie Tuitama is gone from last year's team.  Sophomores Matt Scott and Nick Foles have been battling all off-season and training camp to replace Tui.  At this point, a starter has not been named, and both are expected to play in the season opener against Central Michigan.  The Wildcats also lost record-breaking WR Mike Thomas.  Despite the losses, the Cats return some very important pass-catchers.  All-World TE Rob Gronkowski is back for his junior season.  Gronk caught 47 balls for 672 yards and 10 TDs, all while battling mononucleosis at the beginning of the year.  WRs Terrell Turner and Delashaun Dean are both back, and bring with them 96 catches, 1,173 yards and five scores.  Sophomore WR William "Bug" Wright will be replacing the departed Mike Thomas.  Coaches have raved about Bug all off-season.  H-Back Chris Gronkowski returns, with eight starts under his belt, and a 24.8 YPC average from last season.

When opponents have the ball:

Rush Defense:  Ricky Elmore and Brooks Reed will be coming at quarterbacks from the edge while Donald Horton and Earl Mitchell attack from the middle.  Brooks Reed had 8 sacks last year and Ricky Elmore had 4.  These guys can come and come quick.  The depth on the defensive line is great with D'Aundre Reed, Dominique Austin, Lolomana Mikaele, and Apaiata Tuihalamaka waiting in wings.  The linebacking corp will be Sterling Lewis, Vuna Tuihalamaka, and Xavier Kelly starting. Corey Hall, C.J. Parish, R.J. Young and outstanding freshman Jake Fischer will be rotating in to help keep everyone fresh all year long.

Pass Defense:  This is one of the strengths of this year's team.  Devin Ross is back.  Trevin Wade is stepping up from nickel-back a year ago, where he tied for team lead in interceptions, and will be a full-time starter at corner.  Cam Nelson is back at safety and super-talent Robert Golden has made the switch this offseason from corner to safety.  All four of these guys fly around the ball, and will punish ball carriers.  The Wildcats typically deploy a zone-coverage scheme in the secondary, so look for plenty of opportunities for interceptions and big hits.  Super-frosh Adam Hall (who still may redshirt) backs up Golden and Nelson at safety.

The Wildcats drew a tougher schedule in 2009 than 2008.  The Cats have an even six home games, six road games in 2009.  Five of the six road games are against top-notch opponents, and the sixth is in Seattle at Husky Stadium, which despite last season has historically been hard on road teams.   Some of you may not consider Arizona State "top-notch," but everyone knows traveling to Tempe for the Territorial Cup is a challenge. The home slate is more forgiving.  On paper, Oregon presents the toughest challenge at Arizona Stadium.

The first four games, and the last four games is where the success of Arizona's season will be determined.  Central MIchigan, @ Iowa, and @ Oregon State present three big challenges right out of the gate.  To close, @ Cal, home versus Oregon, @ Arizona State, and @ USC present a difficult finish.

Everything is rosy - Arizona's quarterback issues are not a problem and Matt Scott, Nick Foles, or some combination of the two guide the Air Zona offense with ease.  The defense plays strong all year, and rivals USC for tops in the conference.  The Cats win five of six home games, at least, and at minimum split on the road, looking at an eight win season or better.

The sky is falling - The team flip-flops quarterbacks all season, and the offense never finds the consistency it enjoyed under Willie Tuitama the last two seasons.  The defense is strapped at linebacker, and continues to struggle against running quarterbacks. The Cats split their six home games, and pick up one or two tough road games, sputtering to a four or five win season.